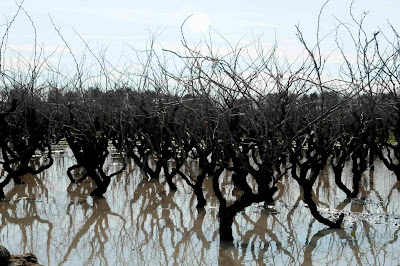 The last two winters in Puglia have been strangely warm and rainy. As far as terroir and weather go in Puglia, the winter is similar to some areas of California: a single snow per season, temperatures hardly ever get down to freezing, and some rain. Unlike California, Puglia does not get as cold at night as areas like Sonoma and Napa do.

When it’s not raining, I like to hit the countryside on my bicycle and I’ve gotten to witness wintertime vineyard maintence. Likewise, the guys whose job it is to prune Puglia’s endless rows of grapevines like to get down to their perpetual task. Here are some of my observations. (Below, vines yet-to-be pruned on the left; pruned vines on the right) 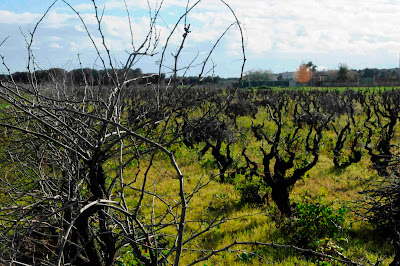 After the grape harvest, grape vines in Puglia are left haggard. Bunches of forgettable grapes are left hanging. As autumn deepens, the leaves fall off and only clusters of raisins remain clinging to the bare vines. This is cool however, because it shows anyone whose interested the anatomy of a grapevine. Every year a grape vine grows several feet only to be pruned back to one or two inches. This is why old vines are so powerful and respectable. 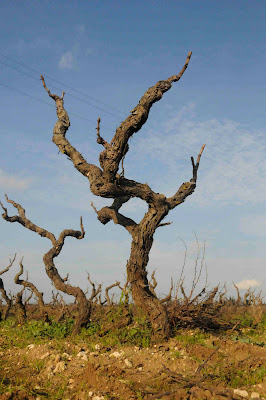 The alberello (little trees) growing style is a result of extreme pruning. In order for the vines to become free-standing trees they are closely pruned for years in order to develop a thick, sturdy trunk.

As soon as enologists and their crews recover from the celebrating that follows the grape harvest, they return to the fields to prune. Puglia, being one of the highest-yielding grape-producing regions in the country that yields the most grapes in the world, has thousands of acres of grapevines. It probably has millions of grape vines and billions of grapes. Can you spot the worker below? 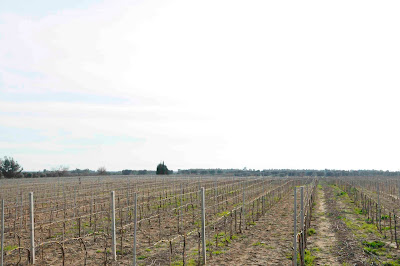 To be continued…
Email Post
Mattie John Bamman
After more than a decade as a travel writer and restaurant critic, I moved to Maine with my wife to start a homestead. I created Ravenous Farmer to inspire others to live more sustainable and fulfilling lives.