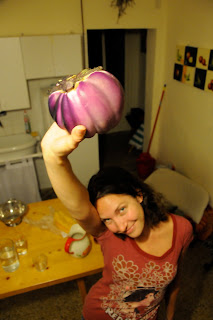 I know I just posted, but NPR's latest report on obesity in Italy and the disappearance of the Mediterranean diet has fully creeped me out. I wake up to NPR every day, and the first words I heard today were "We'll tell you why Italians are abandoning the Mediterranean Diet." I just wrote an article on the Mediterranean Diet and I was initially worried that a new scientific study found the diet unhealthy and that I'd have to retract the article ("The times, they are ah changin'" and fast: I wrote an overview on Northern Ireland two months ago, stating that the violence that once ravaged the area had been over for nearly a decade; then Belfast turned into a riot zone two weeks later.). Anyway, NPR's report wasn't about a new scientific study but about the fact that Italy has the largest obesity rate in Europe. What happened to all those good vegetables, fruit, olive oil, and fish? They got expensive. Now people eat meat because it's less expensive than tomatoes. There's something wrong. Very wrong.

But this news doesn't reflect every region in Italy. As I wrote in my article, soon to be published, fruits and vegetables, fish and olive oil, are still major components of the daily diet of Pugliese. Puglia has remained uninfluenced by the agendas that Europe, and America, have been pushing. But how long will the region hold out? For that matter, how long will we hold out? We who pay dearly for our artichokes, red peppers, and olive oil? Reduce. Reuse. Recycle. Like my mother always told me.
Email Post
Mattie John Bamman
After more than a decade as a travel writer and restaurant critic, I moved to Maine with my wife to start a homestead. I created Ravenous Farmer to inspire others to live more sustainable and fulfilling lives.

Mary Squires said…
I was just reading an article similar to your subject. I write about olives and olive oil and the article touched on how Pugliese growers have been perpetually cheated by the Italian government when it comes to subsidy sharing. Apparently subsidies don't make it back to the grower so they can't afford to grow as much produce. Interesting. Enjoyed your article. Next time I plan a vacation I'll make sure to check if you've written on the location so I can be well prepared.

Thank you for the thoughtful words. In terms of vineyards, I believe that subsidies dried up in Puglia during the 80s forcing cooperative wineries to either brand themselves and enter the market as individuals or sell out to larger companies from northern Italy or foreign countries. Since Italy doesn't currently allow new vineyards to be planted, Puglia has become a popular place to purchase vineyard land, and there's been major investment there by major wine corporations. Maybe it's the same with olive oil... I do love the south, and I know that it is looked down upon by the north (Americans sometimes do the same with our south). But at least they eat better!------Mattie
July 14, 2011 at 7:01 PM