Though I have returned, these flavors will never leave me… 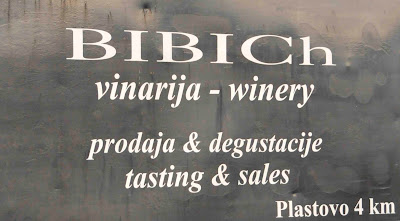 We arrived at BIBICh winery at dusk, and the quickly darkening countryside was a mess of with low-lying brush, grapevines, and steep descents. The terra, pulverized limestone, was almost sandy. I felt as though the hills might roll off into nowhere, and this feeling of falling into another world was haunting. I felt as though I were on a ranch in Texas or New Mexico, not on Croatia's Dalmatian Coast. Some of the worst fighting of the Serbo-Croat War happened around BIBICh winery, and almost every vineyard had to be replanted during the late 1990s. Alen Bibić ‘s family has a 500-plus-year history of winemaking, and Alen could only shake his head and say, “It is very sad.”

I remember the giant wooden gates clearly; they led into a courtyard that may or may not have been unpaved—may or may not have been made of sand. A cold wind from the distant mountains was whipping across the hilltop, and we had to struggle to open and close the door into the tasting room. Alen and Šime Petrović welcomed us to a set table full of open bottles—the night’s tasting. 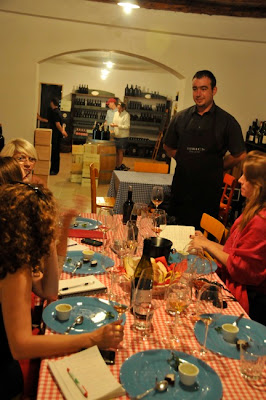 Thousands of descriptors could be used to describe BIBICh’s wines, but, for me, the clearest description is this: BIBICh wine dances. It is lithe and bright, and it stood in direct opposition to the weather outside. It is unusually low in alcohol and features little-known grapes, such as the white grape, debit. Alen said he foresaw a good future for debit. “People, over time, will get to taste more,” he predicted.

To accompany the wines, a tasting menu had been prepared by Alen’s wife, Vesna. Anthony Bourdain was slated for the next night’s dinner. He’d been trailing in our olive oil dust for days.

The first pairing was fresh oysters and BIBICh’s sparkling N/V Brut, made with 100% Debit and crafted using the champenoise method (it is not imported). I didn’t like it. The flavor was dull. However, the texture was surprising and unlike anything I’d had before: it felt like drinking wool. Vesna had prepared local oysters. Half were simply cracked then left untouched, while the other half were covered with Worcester foam. This was the first taste of Vesna's incredible molecular gastronomy.

Next up was the 2010 Debit varietal ($16) paired with a cucumber granita on a bed of sprouts topped with trout roe and smoked trout shavings. The dish’s fruit and smoke flavors paired perfectly with the extremely nimble, dry wine. I tasted butterscotch and bitter lime peel, and it was chalky and a bit grassy. It was astonishing. 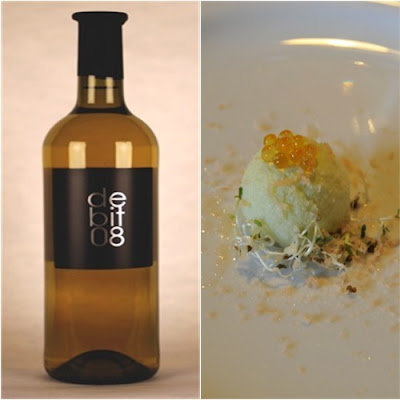 (Photos: All of the photos of wine come from Blue Danube Wine)

The northern Dalmatian Coast seems to have a similar growing environment to Puglia, Italy, which is located across the Adriatic Sea. Ground water lies as deep as 200ft, the summer sun is brutal, and the topsoil is shallow, but the cool wind of the sea stops the grapes from maturing too fast, maintaining acidity. The fruit creates wines with numerous, intense flavors that are good for food pairing. The 2010 Debit is a high-value wine.

Next, we tried the 2009 R5 Riserva ($18)—a blend of debit, marastina, posit, chardonnay, and pinot gris—with sea bass tartar flavored with orange and chili pepper. Aged for one year in American oak, the R5 was made in international style, with some toastiness. I didn’t find that the oak obscured the intrinsic flavors of the grapes. It was dry with nice fruit on the nose. I tasted vanilla and felt strong mineral textures. A solid food wine.

Getting down to business, Alen brought out the single-vineyard 2008 Lučica (100% debit - $25) paired with the area’s famous scallops (I’ve written all about Sibenik’s seafood here), which were served on and under disks of semi-hard goat cheese. The scallops were peppered with black sesame seeds and doused in sesame oil. Lučica features fruit from one of the few vineyards that wasn’t devastated by the war. BIBICh’s importer to the U.S., Blue Danube Wine, says the vineyard has 47-year-old vines. Alen explained that each plant in the vineyard produces enough fruit for half a bottle of wine, and that he does not press the fruit. That’s highly concentrated fruit plus top notch free-run juice which equals an insanely bright wine with a viscous texture and an almost interminable finish. The brightness corresponded with a saline quality that brought out the flavors of the tangy goat cheese, which in turn brought out the flavors of the scallops. Aged in new American oak for one year, Lučica was also toasty on the nose.

This next pairing was even more ridiculously awesome: the 2008 R6 Riserva (the first red of the night; a blend of plavina, babich, and lasin - $19) with cuttlefish linguini over Paski cream topped with olive oil foam and almonds with olive oil dust and black truffle and balsamic reduction on the side. The cuttlefish was boiled for nine hours in its own ink then put through a pasta machine; it glistened like black latex. The flavor wasn’t fishy, just reminiscent of the sea, and it was a lot of fun recreating the flavor profiles by mixing it with more or less of the dish’s other components. I have no idea how one creates olive oil dust, but my hat is off to you, Vesna. The R6 was slightly hot on the nose—not unpleasant but surprising for such low alcohol—and very rich in the mouth, with flavors of plum. I see this wine aging well over the next five years. 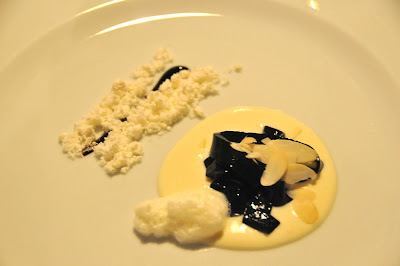 The next course included two wines: the 2005 Sangreal (100% merlot - not imported) and the 2008 Bas de Bas (80% Sirah, 20% local varieties - not imported). They were paired with lamb encrusted with hazelnuts, which was served beneath a brittle and over chive oil. The brittle was comprised of “the mix of the boss,” which Alen described as a major Mediterranean mix of 25 spices, but I’ve never heard of it (fill me in if you know). The Sangreal again danced, with a little raisin on the nose. It was dry, medium bodied but light in character, and had a big finish. The Bas de Bas was rich and more concentrated, yet also retained the light character. The Bas de Bas is a serious wine. 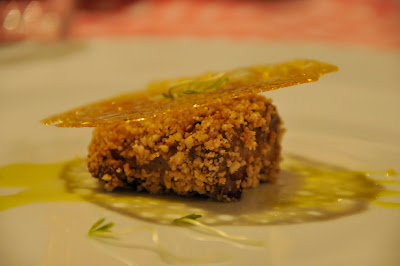 The final course featured the N/V Ambra dessert wine (100% debit - not imported) and a crema catalana with a chocolate cake. Ambra is produced by drying the grapes on mats then pressing them—several months later—in July. The wine was pure Mediterranean nectar. A nose of burnt caramel paired well with the burnt caramel of the cream catalana and the peach and apricot flavors enhanced the chocolate cake. 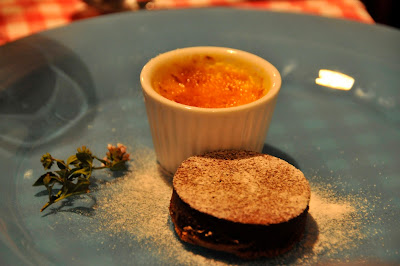 When we left BIBICh winery, a giant red moon was rising above the clouds. The wind was cold. I was drunk.

Go visit BIBICh damn it. A tasting just like the one above costs between 100-120 euros. It's a lot, but it embodies my philosophy of Ravenous Travel: An elite food experience at an incredible value. Contact the winery directly or a tour company like this one. Note that the wines cost up to 40% less when bought on location. 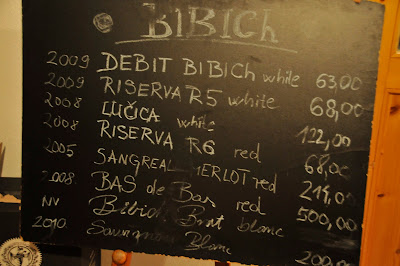 I just want to point out that I understand the gravity of saying that BIBICh winery provided me with my best culinary experience. I traveled through Croatia, Slovenia, and Italy—three countries with exceptional food—eating at 5-star restaurants and even visiting the white truffle fairs in Istria and Alba, where I was served tasting menus featuring fresh white truffle. This article is long because the experience warrants it.

Sip with Me! said…
Mattie, this looks like an incredible experience. Thanks for keeping it long, and keeping it real — I hung on every word, imagining every bite and sip. I think I'm going to call yourself the Hedonist Traveler instead. You are a very lucky man!
April 24, 2012 at 1:55 PM