You won't find much of an online presence for this Cape Town restaurant. Bebe Rose serves traditional African food, using many of the culinary traditions and ingredients found in Cameroon and Ethiopia. The restaurant provides the unique opportunity to sample dishes you won't find anywhere else but Africa. I can't think of a better way to describe it than as soul food, and the flavors, even though they were totally foreign to me, somehow tasted comforting—almost like a home-cooked meal. I wouldn't have found it if it weren't for an astute recommendation by Hannah Deall of the Cape Town Tourism Board.


Located inside of the African Women's Trading Market on 112 Long Street, Bebe Rose doesn't put its sign out on the street. In fact, it doesn't even have a sign with its name on it inside the market. After wandering among the stalls selling African masks, artisan jewelry, and traditional clothing, I had to ask a man where to find it. He responded, "You mean the African restaurant?" Hmmm, not a bad start.

To find Bebe Rose, walk down to the market's subterranean floor and look for a taciturn sign reading "Ethiopian Restaurant." I don't even think there's an arrow, but you can see the dining room down a short hall. It's spartan: a few brilliant paintings, with bright yellows, oranges, and reds; signs written in an alphabet I didn't recognize; and about five tables, which were clearly acquired haphazardly. I took a seat at a computer desk.

The three other customers looked to be on their lunch breaks, and everyone was eating with their hands. In the middle of the room, a large pitcher stood for washing. Soon, my friend and I were greeted by Bebe Rose, a warm woman with a deep appreciation for hospitality. We didn't realize that there were menus until later, but we wanted Bebe Rose's recommendations anyway: Bring us your favorites, we said.


The first plate was Cameroonian 'vetkoek' served with fried beans ($4). Full of dark spices, the beans were served in the middle of the plate surrounded by six vetkoek, or deep fried dough balls. The vetkoek were like savory doughnuts, and we used them to sponge up the beans. The dish was obscenely heavy and wildly simple, and I found it intriguing but I didn't know why. When Bebe Rose returned, I asked her what types of spices she used. "They are Cameroonian spices," she said, and when I prodded her for more she said, "I don't know the names in English." She asked if everything was delicious, and when we said absolutely she said, "I'm so glad," a big smile spreading across her face, then she rushed into the kitchen.

When she returned, I asked her where she had learned to cook. "Oh, I began cooking all of these dishes when I was a little girl. Every girl had to learn to cook." She went on to explain that she hadn't wanted to cook when she was young for this reason—that she had wanted to be a beautician. It wasn't easy being a woman with the desire to work, but she was determined. Eventually, her love of cooking won out, and she established Bebe Rose.


The next plate was tripe in a spicy sauce served with pap ($4). Pap was eaten by the native peoples of South Africa hundreds of years ago, and it's still popular. It is a ball of cooked cornmeal, and it is used like Ethiopian injera bread to pick up food and sauces. I'm not a big fan of tripe, but this was easily the best I've had. Bebe Rose smothered the tripe in hot spices. The pap stuck to my fingers as I used it to pick up large pieces of the gooey meat. 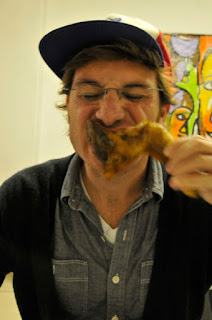 The last dish was a succulent fried chicken ($6). Nothing fancy except for the juiciness of the meat and the crispness of the skin. Delicious!

It had been a pleasure talking with Bebe Rose and hearing her story. She seemed overjoyed that we loved her food, and I really can't recommend the restaurant enough. It's full of African dishes, including Doro Wot, an Ethiopian stew of meat and berbere spice; Kondre, a plate of beef with raw plantain in a freshly ground peanut sauce; Achu, a traditional Cameroonian meal made of Taro and rock of salt mixed with spicy palm nut juice and beef; and a "vegi combo," comprised of spicy split lentils, yellow peas, potato, and carrot in a spicy sauce with greens, chickpeas, cabbage, and shiro and served with injera bread. For the true ravenous traveler, look no farther than Bebe Rose.