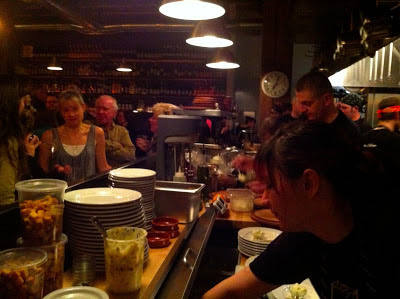 Food:
Tasty N Alder will serve brunch beginning at 9am because, as Gorman slyly points out, you can't get a good Portland chef in the kitchen any earlier. Drawing inspiration from around the world, the brunch menu includes small plates and a selection of gourmet breakfast sandwiches as well as numerous entrees.

For dinner, Tasty N Alder becomes a steakhouse, and vegetarians won't find much to eat on the menu. Several cuts of prime, organic, grass-fed beef will be offered nightly, organized by ranch and cut, such as porterhouse, roast, and ribeye. There weren't many 5th quarter meats on the menu, but Tasty N Alder was handing out what-appeared-to-be-a-delicious plate of marrow served with toast. I hope to see more of this in the future. 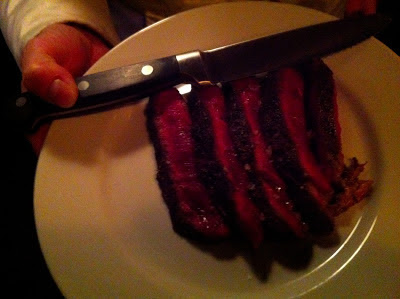 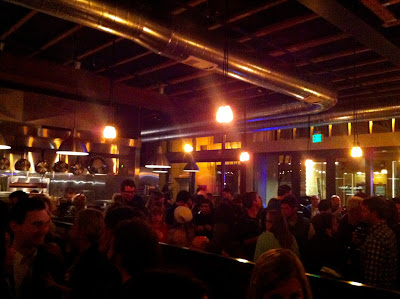 Atmosphere:
Tasty N Alder was obscenely packed when I arrived, so I more or less saw as far as the back of the head in front of me; however, the dinner vibe will involve near-dark lighting, an open kitchen, a cozy seating section with black booths and tables, and a decently sized bar area with bar stools. One wall features towering shelves holding an eclectic selection of liquors—think plenty of bitters from around the world alongside top-shelf tequilas. An exposed air duct runs along the ceiling, too, giving the restaurant a warehousy feel. In sum, I think Gorman did a great job creating a space that will fit the bill for both brunch and dinner. 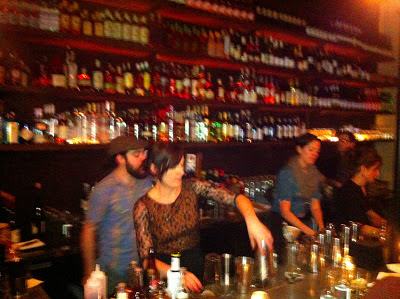 Cocktails, Wine, n Beer:
Tasty N Alder's cocktail menu is inspired and prices run between $8-12. Most cocktails are $9. Here are some examples:

The wine list features mostly French and Italian wines with a smattering of local and Spanish wines. Ten wines were offered by the glass, including two sherries and one served straight from the barrel. The prices are right, and most glasses run $8-$10 and most bottles $30-50.

In terms of beer, the menu seems a little too exclusive. Six beers are offered on tap—three of which run $7. The restaurant keeps it real though: You can always get the Miller High Life in a can for $3!