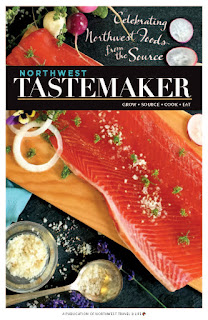 A special edition magazine, NW Tastemaker is one of the most fascinating projects I've ever worked on. Developed to define Northwest cuisine, it showcases local farmers, charcuterie producers, fisherwomen, and other food folk to tell the stories behind the Northwest's most inspired restaurants. As contributing editor, I worked closely with Allen Cox, editor of Northwest Travel Magazine, and together, we reached out to the Northwest's best chefs, from Idaho to Alaska, to hear their definitions of Northwest cuisine. NW Tastemaker is the culmination of their perspectives, and it tells the often untold stories behind the dishes inside of the Northwest's most famous restaurants.

Here's what you can expect: NW Tastemaker is broken up into eight sections, each containing a variety of articles to take into account the various sides of Northwest food, from fishing to cheesemaking to making bean-to-bar chocolate. Each section concludes with recipes from Northwest restaurants and a consumer guide to help you find the best local ingredients. Check out the spread below for a portion of our From the Sea section, including the story of how shellfish farming can save the world's oceans.

Perhaps the real reason I loved working on NW Tastemaker was that it brought me closer to Northwest cuisine. I don't think it's necessarily important, or even possible, to create a steadfast definition of Northwest cuisine, but identifying the elements that connect us, whether in Portland, Oregon or Vancouver, British Columbia (or the Tutka Bay in Alaska in the case of chef Kirsten Dixon), gives us a better sense of place. A better sense of community. A place where we can begin to move forward.

Buy NW Tastemaker here, or find it on the shelves at Fred Meyer, Albertsons, Safeway, and more.


Except from NW Tastamaker, From the Sea, pages 42-49:
Email Post
Mattie John Bamman
After more than a decade as a travel writer and restaurant critic, I moved to Maine with my wife to start a homestead. I created Ravenous Farmer to inspire others to live more sustainable and fulfilling lives.