After a lot of delicious work, we published An Eater's Guide to Portland on Eater Portland. Check it out to see the entire city's food scene introduced in one handy guide. Here are some of the highlights:

Welcome to the Land of Craftsman Cuisine

Straight up, Portland has something most other cities do not: the natural bounty of the Willamette Valley, mostly unblemished by development and pollution. This gives Portland chefs a huge arsenal of ingredients to play with—whether the cuisine of choice is regional Indian food or modernist Spanish tapas...

Where to Start on Eater Portland's Top Maps

As you know, Eater publishes and updates a rather massive database of maps—each focusing on one of the city's signature foods or dining trends, from tacos to bento boxes. For those who want to get to Portland's culinary heart through its ribcage, we've compiled the crème de la crème, the top one or two listings, from each of these maps here.... 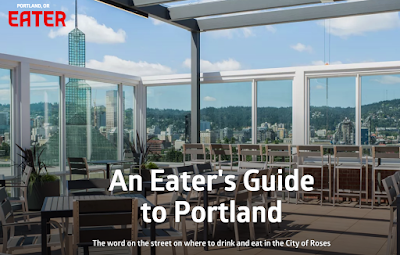 SOUTHEAST DIVISION/CLINTON: Pok Pok kicked it all off in a shack in 2005, and now nearly every restaurateur in the city has jockeyed for a spot on SE Division Street (so much so that the growth has spilled out a couple block south on SE Clinton Street, too). Here, between the reckless construction, you'll find many crucial restaurants...

Amphora-Aged Cocktails: Clyde Common's Jeffrey Morgenthaler is credited with inventing the barrel-aged cocktail, a fully mixed batch of cocktails aged in a wooden barrel to gain flavor—as a winemaker might age wine. Today, Ava Gene's bar manager Douglas Derrick takes this further: He's teamed up with a local winery and amphora producer to make amphora-aged negroni, only available at the restaurant.

Northwest Bounty: This is the annoying term that everyone seems to use to describe what makes food in Portland different. What makes it annoying is that it's true: Bigger and better ingredients come from the Pacific Northwest. Taste it, and you will understand.

Reservations to Make in Advance

LANGBAAN: You've almost certainly never had Thai food like this before. Langbaan serves historic regional Thai dishes—some from ancient royalty's cookbooks—and is perhaps the hardest Portland restaurant to get into. It's a hidden restaurant inside of PaaDee and books out months in advance. Make your reservation now to taste an incredibly well designed prix fixe menu.

Continue to the full guide----->
Email Post
Mattie John Bamman
After more than a decade as a travel writer and restaurant critic, I moved to Maine with my wife to start a homestead. I created Ravenous Farmer to inspire others to live more sustainable and fulfilling lives.