Getting Wasted On The Tears Of Christ, and other wines...

Last week we took a trip to Los Angeles to visit my girlfriend's father. He has a great taste in wine and we're always excited to see what he's picked up for the occasion. Our first night, he grilled a gigantic piece of wild-Alaskan salmon with zucchini with rosemary on the side. 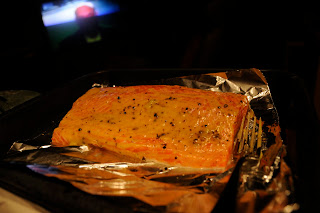 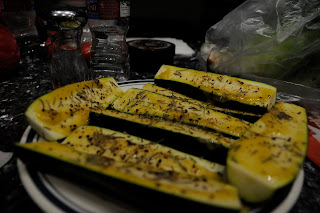 While the fish cooked, he pulled out a bottle of 2006 Lacryma Christi. The wine was a beautiful experience, with nice ruby, round fruit, and bone-dry. A long maceration process of six days is responsible for the wine's dark color and strong tannins. Next time I will decant a bottle of Lacryma Christi because many of its true flavors came out fully in my last glass.

Lacryma Christi, which translates to tears of Christ, is an Italian grape variety grown around Naples. Red, white, and rose wines are all produced from the grape, but the bottle we had, a 2006 DOC, produced by Terredora di Paolo, was rosso, eh... red. The Campania region, in which Lacryma Christi grapes are grown, actually has two types of DOC designations, the usual, and the Vesuvio DOC. The difference? The latter requires an alcohol content that is 1 percent to 1 1/2 percent higher. Unfortunately, our wine was not Vesuvio DOC.

In true Italian spirit, the name of the wine comes from a poetic tale. When god cast the devil from heaven, the devil landed on Mount Vesuvios, the volcanic mountain outside of Naples. The devil caused massive destruction, of which Pompeii is an example, causing Jesus Christ to weep. When Christ's tears hit the volcanic soil, a grape vine took root in their place.

It turns out that the grapes are actually featured in several poems by well known poets. 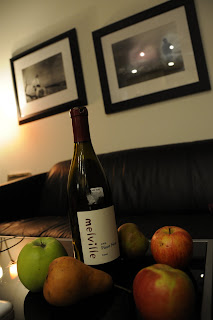 We also tried a 2006 Melville Pinot Noir from California and another Italian wine produced by Terredora di Paola. The Melville was the perfect combination of simplicity and deliciousness. The second Italian was made from Fiano grapes. Fiano is "currently winning the Italian white varietal beauty contest," according to wine writer, Tom Maresca. While I am not sure what that means exactly, I do know that Fiano grapes are particularly sweet, and were traditionally used only to make sweet sparkling wines. But over time, Fiano grapes have been tamed into submission after years of experimentation among Italian winemakers.

Our bottle of Fiano was actually Fiano di Avellino, a celebrated variation of Fiano, and was not particularly sweet. It had a true burst of flavors, such as lemon, the grassiness of Sauvignon Blanc, and a light toastiness of California Chardonnay. Terredora di Paola made their Fiano di Avellino dry by picking the fruit during the first ten days of October and fermenting it at a cool temperature. The wine also ages for several months on its lees, deposits of yeest that separate from the wine during and after fermentation, giving the wine a somewhat yeesty flavor. 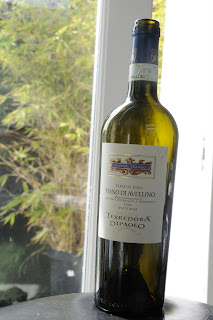 Fiano Di Avellino
DOCG
2006
Terre Di Dora (single vineyard)
Terredora Dipaolo
Email Post
Mattie John Bamman
After more than a decade as a travel writer and restaurant critic, I moved to Maine with my wife to start a homestead. I created Ravenous Farmer to inspire others to live more sustainable and fulfilling lives.