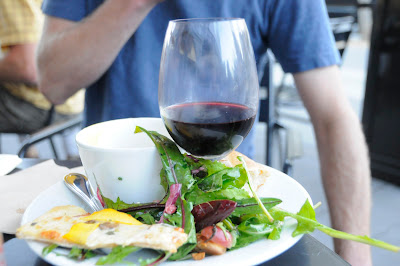 It was hot in San Francisco last Saturday and the heat from the Prop 8 protests added to that. Of course, withholding equal rights from anyone is libel to raise the temperature in a room. To escape the heat of an angry city, my girlfriend and I decided to visit the Farmers Market at the Ferry Building at Embarcadero. James Baird, who works at the Hayes Street Grill stand at the Embarcadero Farmers Market each Saturday (he also bartends at Eos Restaurant and Hayes Street Grill during the week), invited us to an annual party held for the farmers at the market. 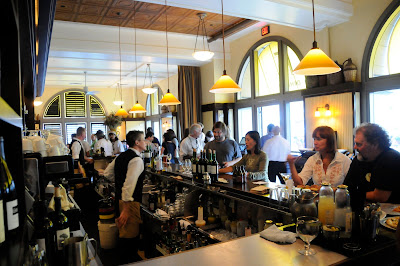 The party was held at the MarketBar after the farmers had finished packing up what was left of their delicious fruit and vegetable stands. At around 2:30pm we decided to check out the open bar. It featured artisan beers and plenty of fine wines, including a Mendocino Farms red, a dry DaVero Sangiovese rose, and two wines from two especially wonderful winemakers, a Chardonnay by Dave Guffy at Hess Winery and a Cabernet Sauvignon by Michael Beaulac at St. Supery.

When the SF skyline finally eclipsed the sun, the party was underway and I met several friendly farmers, such as Jesse Schlesinger who works at Dirty Girl Produce. Jesse, who is part of the Trigger Collective, currently has a show up of his photography at Milk and Honey Art Gallery in Mill Valley. 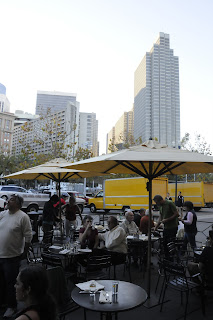 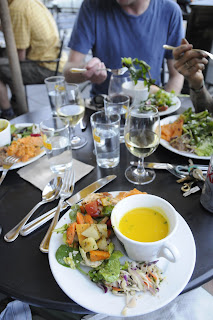 The day reminded me once again just how important the Meal is. A meal served with wine becomes an event. Wine can actually make me thirsty for food. The flavors of a pasta with pesto cream sauce are heightened by an earthy, dry Merlot - and after the sip of Merlot I crave the next bite of food which will in turn compliment the wine. One necessity for complimenting anything is, of course, those around us. When people come together for a meal they celebrate life. And shouldn't we be doing that three times a day? Thank you Bay Area Farmers, for another year of uncompromised flavor and freshness. 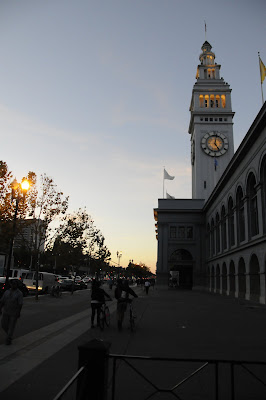