Alba and its surrounding towns, such as Cannelli and Acqui Terme, are the only place in the world where you can find true white truffles. There are similar truffles found in Yugoslavia, but they are not as potent from what I hear. So, once again, Italy provided us with rare delicacies at low prices. The tiny jar of truffle honey that costs 23 dollars in the U.S., is 5 euro. The 250 milliliters of real, actually flavorful white truffle oil, which goes from 20-50 dollars in the U.S., is 8 euro. If I didn’t appreciate traveling light, I would have a backpack full of oils, honeys, tapenades, and crema. 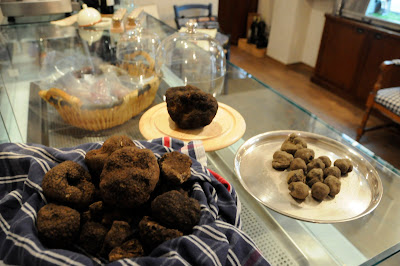 I think it’s important to note that fresh white truffle cannot be found in Alba, or anywhere for that matter, from February-August of each year. Truffles cannot be stored for a long time, unless they are turned into oil or honey, so many people arrive in Alba throughout the year and are disappointed to discovered that no authentic restaurant menus feature the rare fungus. 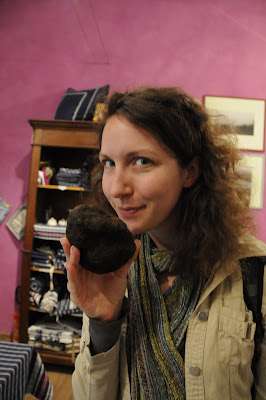 I spoke with a very friendly and hospitable shop owner named Stefano, whose grandfather was the president of the truffle association in Alba. In his shop, Tartufi & Co., there’s a large photograph commemorating the work of his grandfather. Stefano, after pouring Kristin and I glasses of wine and plying us with samples of truffled concoctions of all sorts, showed me black truffles and another type (which I thinker were the truffle of rocche), which are better than black truffles, but not as good as white truffles. To show us just how temperamental truffles are, Stefano showed us a black truffle which he had bought two days prior. When he purchased it it weighed .3 etto (100 grams): now it's only .27.

Another temperament element of the business is exporting. Stefano says that an etto of white truffle is sold to the restaurants in Alba for 300 euro, but the same amount is sold for 3000 dollars to restaurants in the U.S.

Stefano clearly loves what he does, and I was so happy to have him teach me all about it. He had a video that shows him hunting truffles with his dogs Kira and Charlie. Truffles grow under the ground and it takes specially trained animals such as dogs or pigs to find them. His dogs were digging excitedly in the video because Stefano gives them treats whenever they find truffles. He then showed me marks on some of the truffles where the dogs had scraped them with their paws. 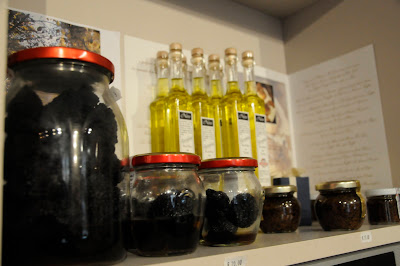 Alba holds a truffle festival for two weeks every October and I hope to make it back. If so, I’ll certainly be in touch with Stefano, and see if he can take me truffle hunting with Kira and Charlie.
Email Post
Mattie John Bamman
After more than a decade as a travel writer and restaurant critic, I moved to Maine with my wife to start a homestead. I created Ravenous Farmer to inspire others to live more sustainable and fulfilling lives.