The Apulia Wine Convention in Lecce 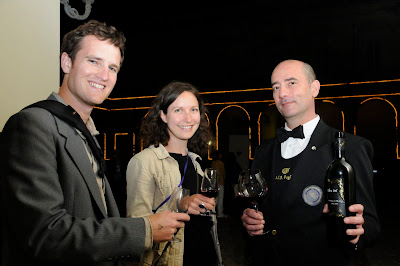 In typical Italian fashion, the Apulia Wine Convention held in Lecce, Italy, started two hours late. As a struggling-young-thirsty-as-all-hell-wine-writer just getting my sea legs on an ocean of 12%-15% alcohol I decided to show up early to take a few photographs. Big mistake. But I also wanted to make sure I didn’t miss a sentence of the discussion (in Italian) of the “new tradition” of wine in the region, as well as a discussion of the local wine cultures continued growth and success, which I took to mean wine tourism, both of which were to begin promptly at 4 p.m. (16h). By 6 p.m. (18h) the event was still in the process of just getting started, so I’ll fast forward and begin by saying, man, what a killer party. 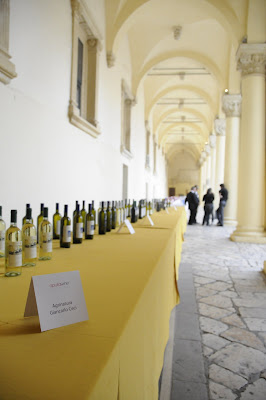 It took place over three days in the beautiful courtyard of the Palazzo dei Celestini, which was decorated with candles and white LED lighting that wrapped around the multitude of arches. The wines were poured beneath the sweeping portico that wrapped around the courtyard. Hundreds of wines were opened and, from my notes, I tried over seventy of them. Puglia being best known for its reds, they comprised around 64% of the wines, with the remaining 36% split evenly between whites and rosès. I was greatly pleased to see that Pugliese winemakers were not only finding a unified character and style among their Negroamaro and Primitivo wines that might be called a “voice,” but that several of the lesser known native grapes were creating successful, unblended wines. If you want a more in depth view of the wines themselves, their nuances and the style that I believe is beginning to emerge in Puglia’s red wines, I wrote an article published by i-Italy on the event. It doesn’t include all the whining that you will experience below. 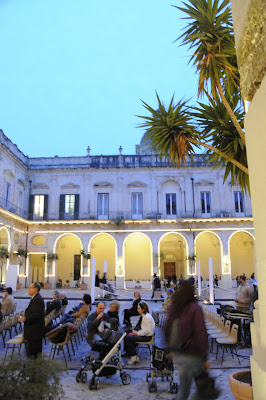 I’d like to address the aforementioned discussions, which, though promised, did not take place. First, the discussion of “new tradition.” Since Puglia’s entire wine production is itself a new tradition, clocking only 30 or so years of high-standard wine production - the prior 4,000 years suffering from the lack of temperature controlled fermentation and underappreciated varieties of native grape (even by the natives) - I was particularly interested in hearing their views on it. This cutting edge knowledge, I thought, could interest even the most educated reader.

Equally important was the discussion on the commercial side of Puglia’s wine. Promoting wine tourism in Puglia involves promoting the second highest wine production area in Italy (Italy itself being the country that produces the most wine in the world) to sock-and-sandled tourists with one-day rental cars and without any reliable online resources. Really I know. I recently tried to visit some of the wineries in Puglia, which proudly reports 26 DOCs within 7,469 square miles (19,345 km²) . Somehow I failed. Completely.

The main problem so-designed-winetasters meet is that the tourist points in Puglia do not offer detailed maps with locations of wineries. If a winetaster, who were say, use to tasting in an area like Sonoma Valley, had come expecting to be greeted with long lists of open tasting rooms with shuttle service, they’d been completely baffled. Where, did you say, are the wineries? You don’t know? You mean, I have to call them all in advance and you have to speak fluent Italian? Oh, and most wineries require a week’s notice. Ok. Sure.

My own ill-fated experience wouldn’t have been so bad if I’d actually been made aware of the above. Rather, the tourist office in Lecce’s Duomo told me none of above. They did however offer me some phone numbers, and, in all due respect, were very friendly. But the region just doesn’t have it together as far as wine tourism is concerned. So, like I said, I was interested in hearing the plans for future action. 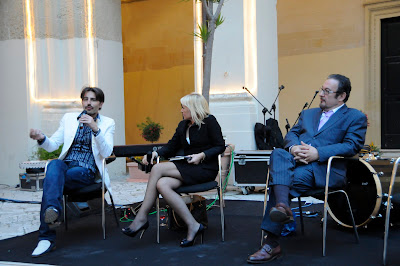 And but so, like I said, the Apulia Wine Convention kicked off two hours late, and the promised interview and discussions, which were scheduled for 4 p.m. (16h), were somehow turned into a discussion on using food to seduce women that featured, Guido Guidi Guerrera, the author of Vivere alla grande , and a gentleman who, as one lady put it, stars in “the Italian Sex In The City.” No cutting edge information here folks. But I did taste hundreds of wines to live jazz.

The real beauty of the event is that, the lack of important information aside, Lecce really knows how to enjoy wine. The Apulia Wine Convention was completely packed, suggesting that the wine scene is growing. Further, the people pouring the wine were knowledgeable, helpful, and friendly. I’ve since been in touch with a few regional winemakers and will be tasting at their estates but even if I weren’t Lecce is offering several wine events this summer that will take place in the center of town. If you plan to visit the area, try to make it to one of these events, that way you won’t have to go through the trouble of calling each winery in advance. Salute!

Here is a list of wineries and their wines that I thought stood out, as well as links to their web sites:

Taurino, “Le Ricordanze” (Semillon and Riesling)
Email Post
Mattie John Bamman
After more than a decade as a travel writer and restaurant critic, I moved to Maine with my wife to start a homestead. I created Ravenous Farmer to inspire others to live more sustainable and fulfilling lives.