The first true night of the experiment has passed and not without surprises. The challenge again, is to pair different wines with different mushrooms—the difficulty being the umami (a type of flavor released when mushrooms are cooked), which counteract wine aromas and heighten wine textures such as astringency and bitterness. 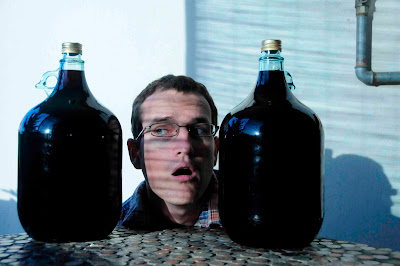 For the first experiment, I paired a lovely, light and juicy novello wine (nothing special, just some jug wine make from local Negramaro and Malvasia Nera grapes, see above) with homemade, mushroom-stuffed mezzalune (half-moon pasta) with a mushroom, white wine, and garlic sauce. My girlfriend and I thought that using wine in the sauce might help balance the mushrooms for pairing however, after tasting, I am certain that cream or cheese would be more successful.

Because we drank wine before we tasted the mushrooms, I cannot judge the immediate effects of the wine's flavor on the food. But I clearly noticed after a few bites of the pasta that the young, juice-like character of the wine was disappearing: The brightness of the nose was almost gone, and the finish, which had been very succulent, was shortened. My opinion was that the mushrooms clearly effected the wine negatively, but the wine still tasted good. Also, the wine did not negatively effect the mushroom pasta.

However, by the end of the meal, the wine had lost almost all of its youngness and its fun character. It was flat and fruitless. Quite simply, the dish had murdered the wine. The tannic character of the wine, which had been practically non-existent before, was enhanced so that it finished with a bitterness.

The Verdict: Pairing a light novello-like wine with mushrooms results in a limp, pathetic wine. The wine never tastes bad, and it does not seem to make the food taste bad (at least, not in the way that a cheese doodle can make a Cabernet Sauvignon taste bad). I need to pair my next mushroom dish with a beefier wine, one whose fruit and body can match the negative effects of the umami.
Email Post
Mattie John Bamman
After more than a decade as a travel writer and restaurant critic, I moved to Maine with my wife to start a homestead. I created Ravenous Farmer to inspire others to live more sustainable and fulfilling lives.