From the Current History of Chianti Department 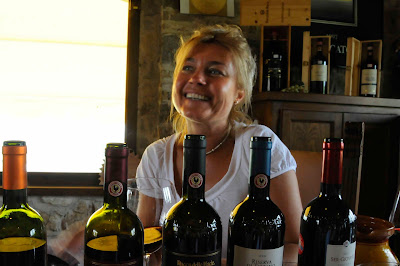 "Merlot and Cabernet rounded out the crazy Mediterranean character, the Tuscan character, to make it easier to understand, but there’s nothing easier than taking off that 10% of Cabernet Sauvignon." ---Georgeta Perhald (Above)

Mattie Bamman: There are a lot of rules that govern how Chianti is made. How do you keep it unique for yourself?

Georgeta Perhald: The most strategic thing starts in the vineyard: The way that you cultivate the grapes. For example, the harvest is done by hand (at Rocca delle Macíe), but everything starts from the soil. Nice and healthy grapes, with healthy sugars and tannins, come from good soil, and this is something that we didn’t have in the past. Because in Chianti---nobody talks about this---what Chianti was in the past is not what it is today. Why? Over production. Then many of the producers realized that reducing the yield would raise the quality. That was a strategy that did not change the identity of the wine, but made it better.

Sangiovese was the most important grape as it still is today. However, producers began to add a little of Merlot and Cabernet Sauvignon. Why? 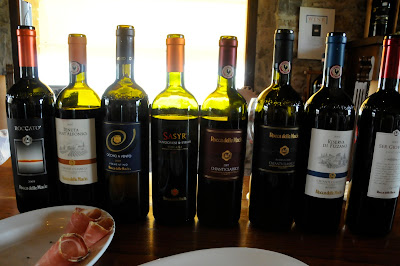 Georgeta Perhald: Not only, in my opinion. I have my own private theory. The Tuscan guy, who was living in the Tuscan countryside 50 years ago. The guy who made the fiasco, the straw basket bottles of Chianti--- Do you know the story?

MB: I know that Chianti wine bottles were often bought in the 70s solely to be used as candleholders....

Georgeta Perhald: A fiasco is a catastrophic thing, right? The legend goes that one day, the guy who made the bottles for the producers of Chianti was too drunk on Chianti and he blew the glass too much and made bottles with a round base so they couldn't stand up. He said to his wife: Hey Maria, I made a fiasco! But she used her ingenuity to solve the problem---adding the straw base. I think this is very telling example of the people in Chianti.

Georgeta Perhald: Anyway, Merlot and Cabernet were introduced, but the Italians did not want to change the story of the Chianti, they wanted to make it better. They corrected it---not to change it---but because everything changes. Our habits, our lives change. The man who made the fiasco didn’t wake up in the morning and brush his teeth using a paste that comes in 50 flavors---banana, strawberry or mint. He didn’t use aftershave or chew a piece of chewing gum. He didn’t have pasteurized milk. And he ate tomatoes with only a little salt and extra-virgin olive oil. Today, we don’t eat those tomatoes, we eat ketchup. This is a sauce of tomatoes, only it is enriched with sugar. So how can we now propose to the people a wine made of 100% Sangiovese that uses grapes grown in high yields? People’s palates are more sophisticated today. We didn’t change the story, we only made the wine better. Using a little Merlot brings a little sweetness from the glycerin and rounds out the tannins of the Sangiovese---its testadura. Today, the guy who made the fiasco has a car, has a cell phone, eats Parmesan cheese every day because it is available on the market; he can eat prosciutto everyday that is seasoned 12 months; he can eat much richer food than the soup he used to eat. And the soup was perfect with that light Chianti; the guy who was working hard in the fields all day could even drink two fiascos a day! Now, with five glasses of wine that are 14% alcohol you don’t do any work. You can't drive.

Things are still changing. Now I have customers asking for 100% Sangiovese. Merlot and Cabernet rounded out the crazy Mediterranean character, the Tuscan character, to make it easier to understand, but there’s nothing easier than taking off that 10% of Cabernet Sauvignon.

MB: Do you think the use of barrique (French-oak barrels) destroys the identity of Chianti?

Georgeta Perhald: Using oak to age Sangiovese doesn’t change Chianti completely, it makes it smoother. The tannin from the French oak, the phenolic tannin, which is part of the wood, along with the cellulose, the glucosium, etc. that compose the wood and are able to be imparted into the wine---these things are doing the same thing as me. I’m putting a coat on and I’m going outside. If it’s cold I can stay out all day without being cold. If the wine is aged in oak, it can face bottle aging for one or two years more than it used to. I’m protecting myself with something natural. If I want a simple or an elaborate jacket is completely my choice.

Here at Rocca delle Macíe, we try to speak a language that others can understand. Our wines never have more than a short aging so that they never take too much oak. Only enough oak for micro-oxygenation, which allows the polymerization of the tannin, which equals more time in the bottle and also which gives the wine more smoothness.

This is all possible because the producers making the wine have these tools. So that is the most important message that many producers of Chianti want to give to the people: Tools, if they are used with brain, heart, and history, can help you represent your country. Some put wood chips in their wine. That is another story. That is changing the story.

MB: Recently I heard a winemaker say that Wine Spectator has something against Chianti, because it never seems to rise above the 91-point mark. Do you think that the rules for making Chianti are restrictive?

Georgeta Perhald: You know... I’m not a politician. I’m not an owner of a company, so my opinion is that of a consumer. I think that Chianti is a great, civilized step from doing something very poor to doing something very important. And that was not black magic. It was not a mafia business move. It was only the hard work of people who understood that hard work and good rules force people to make wine in the correct way, without cheating or using underhanded practices. The organization that makes the rules is not very democratic. It is strict. But it preserves something very important. It helped the product come forth from the misery of that time in the past, and I think that if every part of Italy did this, that Italy would become a paradise. I wish that the people who say how Chianti should be made could do politics. The amount of change that took place in Chianti, without any revolt, any war, and deaths, is amazing. To make something out of nothing.

I like Wine Spectator. I read is sometimes, and it is a very prestigious. It is particularly useful for people who want to learn about wine, even if it is sometimes exaggerated. Compared with Robert Parker, I think it is a tool that you can use to understand different cultures and their wines. The way in which it is written is easier to understand. They take into consideration wines that have both a famous name and real identity. Their judgments, in my opinions, are often the right ones and--- What does the word spectator mean?

MB: A person who watches or observes.

Georgeta Perhald: Right. And, when we were looking at art a moment ago, how many things did I see in that painting? And probably, I am the only one. It is only my interpretation. But, the way that you appreciate a wine, if you taste 100 wines and your interpretation is right 85% of the time, well, then you are a good spectator.

In my next post you'll find the perspective of the Man who Made the Fiasco.
Email Post
Mattie John Bamman
After more than a decade as a travel writer and restaurant critic, I moved to Maine with my wife to start a homestead. I created Ravenous Farmer to inspire others to live more sustainable and fulfilling lives.

Mattie John Bamman said…
Thanks for dropping by JP! I was really impressed with how integrated some of the 100% Sangiovese I tried in Chianti were, particularly Casaloste's Don VincEnzo. Rocca delle Macíe doesn't yet offer a 100% Sangiovese that I know of. Their blended "Sasyr" (60% Sangiovese, 40% Sirah) was a favorite.
August 2, 2010 at 7:19 AM