One of the coolest things that my girlfriend and I got to do on our last trip to Italy was bottle wine for a farmer named Giuseppe Siragusa. Kristin and I volunteered on his farm (as part of my travelogue written for EuropeUpClose.com) located in the foothills of the Abruzzo National Park. 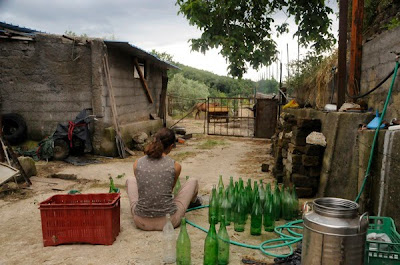 First, we rinsed the bottles with water. Giuseppe makes Chardonnay for home consumption only. I expected a more complex system of sterilization, but he said it wasn't necessary, and that water is the best cleaner around. On the really tough bottles, we used a mixture of water and sand.

Next, we pulled out two 54-liter demijohns of Chardonnay. Again, we used the rustic method to tackle the job. We elevated the huge glass jugs and siphoned the vino using a plastic tube. Sucking on the hose until a rush of Chardonnay came spilling out was an epic moment. Then Kristin and I set to work filling over a hundred bottles of wine. 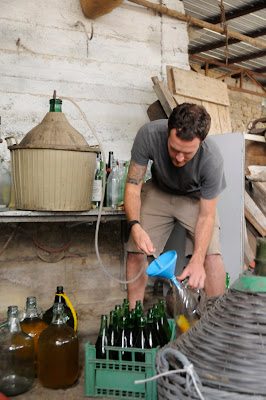 We had to cap the bottles quickly, because, as Giuseppe said, air is the enemy of wine. The longer the wine came into contact with the air, the better the chances were that bacteria would grow, making the wine turn. We stamped on the Pepsi-brand bottle caps, then hauled case after case of wine across the farm to the storage location: an ancient hay shed. 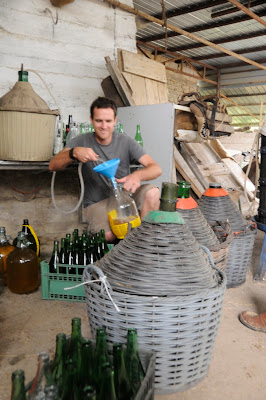 Giuseppe loves to work with the land. He was born in Sicily, near Palermo, and later worked as a soldier and school teacher alternatively. In the mid-70s, he decided that he wanted to own and work his own land, and he moved to the Lazio region, near the border of Abruzzo. 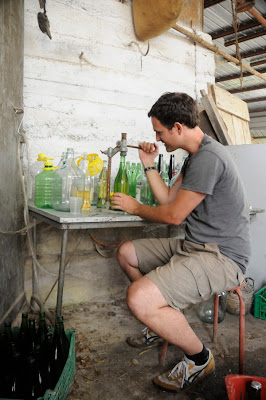 You can visit Giuseppe at Italy Farm Stay, a B&B and volunteer program. The farm always has a great community. He grows all manner of fruit and vegetable, all organically. Yellow and black plums were in season when I was there. Giuseppe grows Chardonnay and black Malvasia grapes. His philosophy, when it comes to wine making, is simple: grown the grapes, crush the grapes, macerate the grapes, bottle the juice. No frills. No problems. The dolce (sweet) version of his Chardonnay tastes something like cider. It's unlike anything I've found in the United States. It's farmer wine, pure and simple. It tastes like the grapes on his vines. 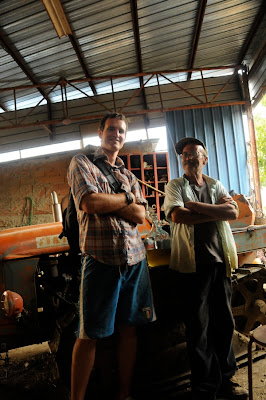 Giuseppe (above right) declares that he never drinks less that 1.5 liters of his vino dolce a day. Kristin and I always started our workday with a glass. To read the full story of my time with Giuseppe, as well as the extremely rustic (extremely roughin' it) living quarters, check out my travelogue, Italy From Bottom to Top, on Europeupclose.com.
Email Post
Mattie John Bamman
After more than a decade as a travel writer and restaurant critic, I moved to Maine with my wife to start a homestead. I created Ravenous Farmer to inspire others to live more sustainable and fulfilling lives.