It's been four months since I drank Bjana's wines, and memories of the Slovenian winery's Cuvée Prestige carry with them a strong emotional response. That wine is opulent in a great way; it is rich, dark, and full. If I were king, I'd drink it every day. Bjana winery is one of the few sparkling wine producers in Slovenia's Goriska Brda region, a wine region that boarders Italy and the famous Friuli wine region. The environmental differences between Goriska Brda and Friuli seem negligible to me, but the latter region is famous and the former is not, making Goriska Brda an excellent place for budget wine tasting. My visit to Bjana is case in point. 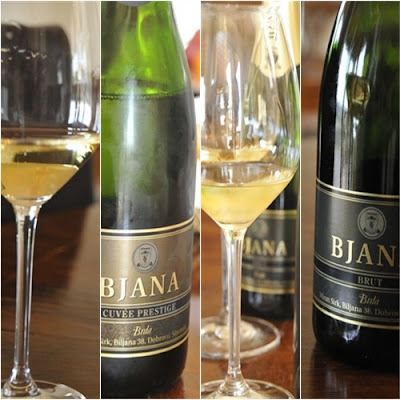 It was a crisp fall day, and I went rogue wine tasting. I knocked on several winery doors and had about a 50% success rate. When I pulled up to Bjana winery, I couldn't find anyone, then I saw an open door leading into a subterranean room. Racks and racks of up-side-down wine bottles were waiting to be disgorged, and winemaker Miran Sirk was up on a ladder. He was kind enough to stop his work and let me taste three of his sparkling wines. 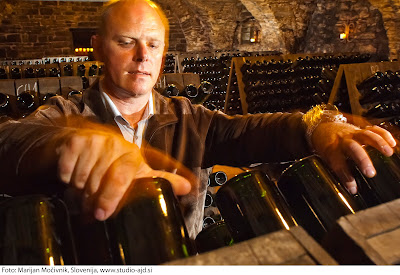 The winery is located inside of a farm house that was built in 1288. Miran's grandfather purchased the property after WWI. When Yugoslavia was born in 1929, the property was confiscated by the government and the home was parcelled out to several families. When Slovenia declared independence in 1991 and the family recovered the residence, it was in terrible shape. Many of the rooms had been vacant all that time, allowing everything from critters to snow to get in. But today, the tasting room has an unpretentiously affluent atmosphere. 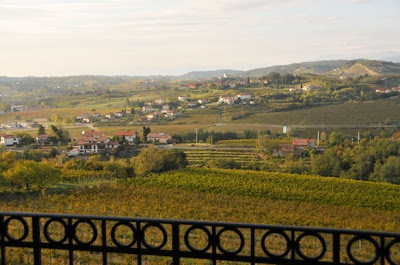 (Photo: Check out this view from Bjana's tasting room! You can just make out the snow-covered Alps.)

Up until 1990, Goriska Brda's sparkling wines were made sweet. Miran wanted to show that dry sparkling wine can be more "elegant, complex, and round in the mouth" when he opened the winery. I tried the Brut first, made from 50-70% chardonnay and 30-50% ribolla (ribolla is the region's most important white grape). It was medium bodied and tasted fine, but the bottle had been open for a while and it was both a little warm and a little flat (a few drinks before cellar work, ah Miran?). I tried the Brut Rosé next, made from 75-85% pinot noir and 15-25% ribolla. It was very dry and crisp, and, had I been wearing a blindfold, I doubt I would have identified it as rosé. If I'd left the winery after these two sparkling wines, I wouldn't be writing this blog post. But next came the Cuvée Prestige. 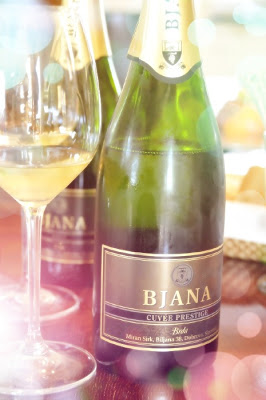 This incredible wine, made from 50-70% chardonnay and 30-50% ribolla, is sold at the winery for just 18€. It features only the best fruit, all of which comes from vines that are 20 years or older. Like all of Bjana's wines, is made in the methode champenoise method. The base wine is aged in French barrels for 7-8 months and the wine is aged on the lees for a minimum of 42 months. Miran adds very little sulfur. He said that the cuvée would be good either cold or warm, bubbly or flat. It has so much character that I believe it. The body was huge and round, and the bubbles were small, creating a creamy mouthfeel. I tasted caramel and roasted almonds. Miran said it could age for another 10 years at least.

Wine Tasting at Bjana
Price: 12€
You get to try three wines with a plate of local cheeses and meats, and Miran made a point of saying that the cheeses and meats are the not the kind that you "can by in a grocery store," but artisanal cheeses, such as the region's well-known Tomlin cheese. You can make a reservation by phone or email. 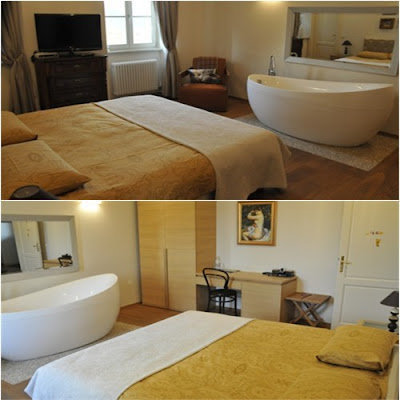 Bjana winery offers romantic, luxurious accommodations, too, and there's no better place to stay in Goriska Brda than at a winery. At Bjana, the room price includes a wine tasting and a bottle of sparkling wine of your choice. Rooms come with a sweet jacuzzi, too.
Email Post
Mattie John Bamman
After more than a decade as a travel writer and restaurant critic, I moved to Maine with my wife to start a homestead. I created Ravenous Farmer to inspire others to live more sustainable and fulfilling lives.

Nubian said…
I hope to visit one day. Maybe you can be our tour guide? The sparkling sounds absolutely delish.
March 9, 2012 at 9:33 PM