During the first few days in South Africa, I learned that the local chefs cooking in Cape Town's restaurants aren't short on creativity and that the traveler has an awesome number of cuisines to choose from.

Further, for Americans, South Africa is inexpensive thanks to a a good dollar-to-rand exchange rate, and I was typically able to walk out of a fine-dining restaurant having spent less than $40 (this includes 2-3 courses with wine). In the case of more traditional restaurants, such as those serving Ethiopian food, I typically spent $5-$20.

There were several stand out dishes, and I was most astonished by the Mushrooms on Toast, served with grated lemon, Parmesan, and porcini dust. The toast had a cake-like texture and it was heavily spiced, including ginger. The mushrooms were served on top and a thick, slightly sweet reduction saturated the toast. All in all, the dish was exceptionally heavy (too heavy for a starter—order it toward the end of the meal), but one bite was enough to shock my taste buds to attention. This was innovative cooking!


The Pork Belly, served with Luke's OX dressing and red cabbage and apple slaw, was heavenly. I don't like to sound like a douche bag, but that's what it was. For me, pork belly has to be crispy on the outside and melt in your mouth on the inside, and Luke's was perfect. The meat had been brushed with a sweet glaze that likely involved honey, and the tangy slaw cut through the sweetness when needed. Now I know why Luke is described as "the king of pork in Cape Town."

These two dishes are likely the heaviest on the menu. Their flavors are massive, which makes them ideal for sharing. For those looking to balance out their meal with lighter dishes, I can recommend the Claus' Coconut and Calamari Salad and the Kingkilp (a mild white fish) Clay Pot, which is served with a Thai-style black pepper sauce and Thai basil. 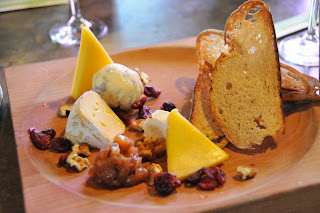 I tried three wines with the meal, and I wasn't impressed with any of them. The best was the 2009 Ataraxia Chardonnay, which was a bizarre and expensive wine. It had melon and honey on the nose, but the flavors were dull on the palate. It reminded me of sherry.

In the next post, we'll visit Bistro Sixteen82 at the Steenberg Luxury Hotel in the nearby Costantia wine region, where round-two of the pork-belly extravaganza will go down.
Email Post
Mattie John Bamman
After more than a decade as a travel writer and restaurant critic, I moved to Maine with my wife to start a homestead. I created Ravenous Farmer to inspire others to live more sustainable and fulfilling lives.

Nubian said…
Sounds like the place to visit when I go home next year. Looking forward to more of your posts about your South African adventures.
July 12, 2012 at 4:07 PM

Tanzania Safari said…
The food looks very mouth-watering. And Cape Town has one of the best wines so dining there is always a treat.
September 27, 2012 at 2:01 AM