I wonder where the line between fusion and international cuisine is drawn? The Pot Luck Club definitely had an overarching Southeast Asian/Mexican thing going on (Chinese-style pork rib/churros), but Chef Luke Dale-Roberts utilized other cooking techniques (porcini dust!) as well as the local product, cheeses, and meats. BistroSixteen82 was equally hard to quantify. 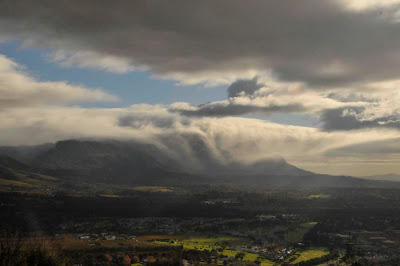 Located in the Constantia wine region just 25 minutes from Cape Town, the restaurant might as well have been in another country. Part of the luxurious Steenberg Hotel, it was surrounded by opulent mansions, golf courses, and vineyards (not the busy, grimy streets of Cape Town, I assure you), and the mind-blowingly beautiful beaches were just a minute away. Heaven on earth? 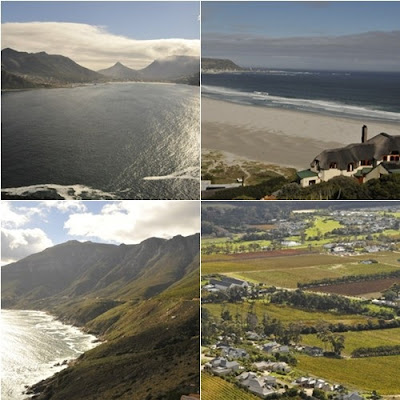 Steenberg Winery was established on the oldest farm in Constantia Valley, which was founded by the infamous Widow Catherina Ras, "one of the most daring and controversial figures ever to settle at the Cape." Definitely read her story if you get a chance, especially the part when she marries a soldier with a love of female slaves (lions are involved!). I highly recommend visiting the winery for a tasting, and I'll get back to its wines in a later post (as well as a forthcoming article for TravelandEscape.ca). 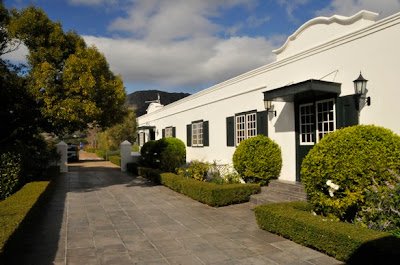 BistroSixteen82 should clue you in on when the farm was founded. It is an inviting space with luxury nuances such as vine artworks and a huge, wine-glass chandelier. One wall of the dining room opens up in the summer so that diners can sit outside. 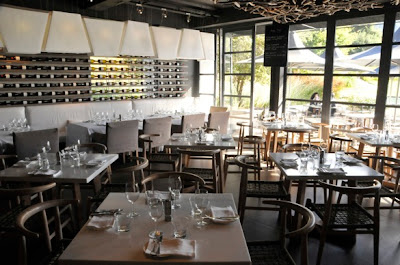 I ordered a glass of my second-favorite Steenberg wine, the 2010 Semillon, which tasted unlike any semillion I'd tried before. It had a multifaceted nose of cooked peach, gasoline (in a good way!), and jalepeno, and it tasted of spicy jalapeno, yellow bell pepper, rosemary, and thyme. It had a medium body that was poised atop a pin of acidity, which was just enough.

Starters, such  as Saldanha Oysters Gratin and Hermon Beef Tongue, ran about $7-$9, and mains, such as the Sauteed Potatoe Gnocchi and the Open Steak Sandwich, ran $13-$20. Once again, Cape Town food came at a great value. 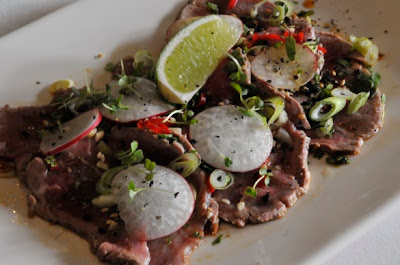 We began with BistroSixteen82's signature dish, the Beef Tataki. The Chalmar beef—made from a low-stressed, vegetarian cows—was flash-seared, chilled, then doused with a mixture of ginger, chili, lime, and sesame. It had a nice acidic bite and spiciness, and the beef was beyond-belief tender. Unfortunately, the flavors ultimately covered up the beef a little too much, and the dish was overly salty—a criticism I do not hand out lightly. Despite these flaws, I would order it again in a heartbeat. 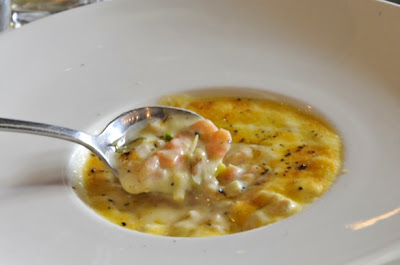 Next, making a mistake in judgement, we ordered the Rainbow Trout Mousseline appetizer, and the acidity of the tataki had ruined my taste buds for the creamy, mousseline. Likely based on a fish mousseline—a delicate blend of ground trout, egg whites, cream, and seasonings—the chowder-like dish featured smoked rainbow trout, leeks, and truffle-flavoring. Unfortunately, try as I might, I really couldn't taste it clearly.

Now, for Pork Belly: Round Two: Enter the Beast— 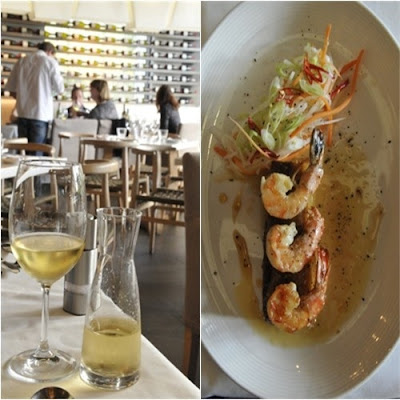 Chef Brad Ball's Sticky Pork Belly is the true candy of meat. All of you bacon-lovers, it's time to get real and gourmandize pork belly. It's where bacon comes from after all! The Sticky Pork Belly came sweet and sticky, with a salted sesame palm sugar caramel, and the inside of the pork belly might as well have been marrow it was so liquified. Oh, did I mention the Tiger Prawns that came on top? No, I didn't, because they were totally superfluous. However, the hot and sour salad that came on the side furnished a tasty and necessary balance to the sweet pork. I can't wait to make Brad's Sticky Pork Belly recipe, which is posted on the blog, Totally Stoned. 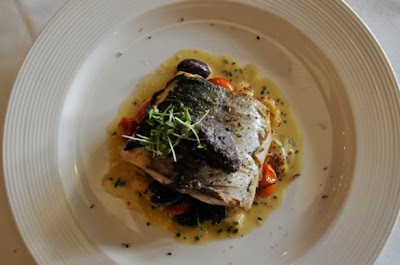 Finally, the second entree was the Line Caught Fish of the Day, which was Yellowtail. Deliciously fresh, the fish was expertly cooked andserved with sauteed baby potato salad with anchovy créme and olives.

Having had too much fun at Steenberg and BistroSixteen82, I had to skip my appointment at Groot Constantia Winery, and our driver, Clenwyd, of the fantastic tour and private chauffeur company, Escape the Cape Tours, whisked me back to Cape Town. Next up, we'll culinarily assault Cape Town's Saturday Market at the Old Biscuit Mill.
Email Post
Mattie John Bamman
After more than a decade as a travel writer and restaurant critic, I moved to Maine with my wife to start a homestead. I created Ravenous Farmer to inspire others to live more sustainable and fulfilling lives.