Another Cheap Wine From Trader Joe's 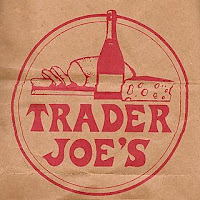 This particular wine is DOC, which means that the government makes sure that the grapes are derive from a specific region and that the wine is produced by traditional methods. Another Italian label for quality insurance is DOCG, which is a more stringent label used to identify smaller regions within DOC regions. DOCG wines are usually better quality than DOC wines and more expensive. 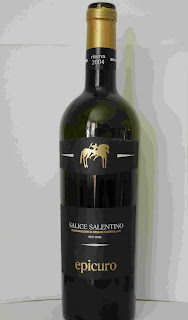 Salice Salentino is one of my favorite wines in Italy because it is medium to full bodied with dark, rich fruit and spice. We had an amazing bottle of Salice Salentino when we were in Italy for 6.99 euros, so it makes sense that the wine can be found in the US for reasonable prices. Epicuro's wine has a nice brightness to it, followed by a medium heat and spice, and while it is not the best out there, is a good wine.

We had ours with White Bean Soup with Roasted Vegetables on the side:

Directions: Cook onion, celery, and butter for five minutes. Add liquid and bring it to a boil. Add beans, garlic, and salt and boil for 2 minutes. Remove from heat for an hour. After an hour, boil again for 1-2 hours or until beans have softened. Remove from heat. Strain the beans, catching liquid into a large bowl. Puree the bean mixture, then return to large pan. Add 1/4 cup milk and broth until desired consistency is reached. Finished with a touch of cream.

For vegetables, just chop up your favorites (we used eggplant, zucchini, mushrooms, red onion, and red pepper) and toss them into a well olive oiled baking pan. Salt liberally (sea salt is the best) and add another dose of olive oil (note: the quality of olive oil for this dish is not as important as others). Preheat the oven at 450 degrees and roast for 20-25mins.
Email Post
Mattie John Bamman
After more than a decade as a travel writer and restaurant critic, I moved to Maine with my wife to start a homestead. I created Ravenous Farmer to inspire others to live more sustainable and fulfilling lives.

jason said…
I've enjoyed the Salice Salentino as well. Have you tried the Aglianico? Both are well worth the $5. I prefer the Aglianico though.
September 30, 2008 at 8:37 PM

I have not tasted the Aglianico but it'll be on my list next time I'm at TJ's. I'm glad to hear that you share my appreciation for the southern Italian wines. I will be moving to Puglia in the spring, and hope to work on a winery there for a few months. I'll be documenting the experience, so check back for it. Thanks for the comment, and I'll be keeping an eye on your blog.
October 15, 2008 at 9:38 AM