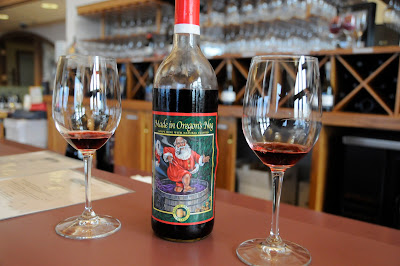 Wineries all like to celebrate the holiday season in their own way, and in Oregon's Willamette Valley several wineries were touting wines designed specifically for the holidays. Willamette Valley Winery's Made In Oregon's Nog was the first Christmas concoction that I experienced; a semi-sweet and very fruity wine made from grapes, blueberries and cranberries. 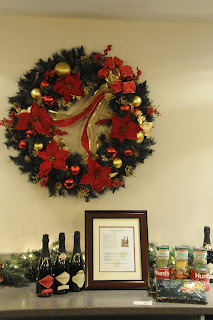 Argyle Winery offered a complimentary tasting of three of their sparkling wines in exchange for a donation of canned foods. The winery advertised in the Statesman Journal and on their own web site, but I don't think the word got around enough. When we arrived with our bag of food the donations looked pretty scarce though the tasting room was full. The gentlemen behind the bar said that Argyle hoped to offer the same exchange next year, and perhaps word of mouth will produce a larger turn out.

At the Eola Hills Winery, seven of their most popular wines bore holiday labels that featured Rudolf and other Christmas icons. Though I thought the labels were a fun idea, they were a bit tacky for me. I mean, who wants a wine for Christmas that looks like it came out of a gun-ball machine? The winery has the ability to print unique labels for their wines without much trouble because their wine production facilities are all under the same roof. In fact, Eola Hills's facility and staff bottles wine for five different wineries in their facilities. 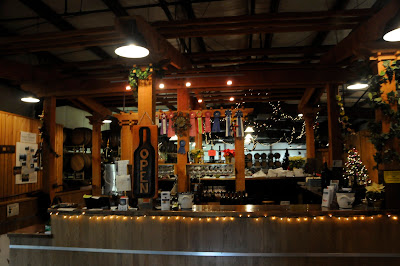 I must admit that I hadn't expected much from Eola Hills when we decided to taste there, but this assumption was wrong. I really enjoyed some of the 23 wines they were pouring that day (no, I didn't try all of them), the 2007 "Lodi" Sangiovese was a particularly integrated wine. Also, the 2007 Reserve Pinot Gris had the unique character of being aged in Acadia wood, rather than oak. Perhaps the wood was the result of the smokey and creamy characteristics of the wine.

Well, I'm now in Maine enjoying a foot of snow and some of the mulling spices I purchased as Willamette Valley Winery. I've got a few weeks of rest before my girlfriend and I head to Italy, so I'll be sharing plenty of great wines in the new year. Stay warm wherever you are, and Happy Holidays! 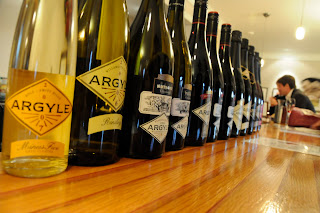