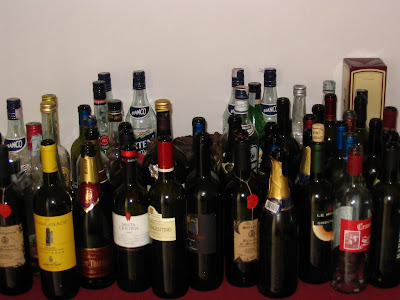 It isn't my thing making New Year's resolutions, and if it were they'd likely be Drink More, Eat More, and Listen At Louder Volumes, but around this time of year I do like to reflect upon the highlights of the past. Perhaps you had some stellar moments that you would like to share here too. Below I've included the top five red wines, top five white wines and top five sparkling wines of 2008, many of which I've shared on this blog during the year. Please email or comment if you have any specific questions about the wines.

The main characteristics I looked for when choosing the favorites where those that they taught me something new, e.g. Stryker's Petit Verdot, brought out the amazing flavors of food, e.g. Ferrari Carano's Fiorella, and typified specific varietals, e.g. Imagery's Cab Franc. Kistler's 1999 Chardonnay (the vineyard of which I unfortunately cannot remember) made me specifically contemplative, as it did those who drank it with me, for when again would we be lucky enough to drink a white wine from the 1900's?

Arrowood Winery's 2005 Late Harvest White Riesling
Icardi Winery's 2007 Brachetto D'Aqui
Email Post
Mattie John Bamman
After more than a decade as a travel writer and restaurant critic, I moved to Maine with my wife to start a homestead. I created Ravenous Farmer to inspire others to live more sustainable and fulfilling lives.