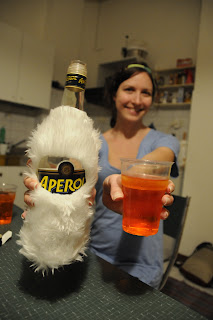 Well, I realize the 4th is just kicking off in the U.S. as I write this. I've already had breakfast, my espressi, and lunch--but that doesn't mean I won't be eating hot dogs a little later (yes, they have hot dogs in Italy--the buns come with American flags on the package). To celebrate the 4th in a foreign country would be lacksidasical if Lecce weren't having Notte Bianca: A night when the entire town stays awake until dawn partying. At this moment there are stages being set up in every piazza in town that will feature live music.

To rock the fourth my own way, I've indulged in a nice wine tasting at La Casa del Primitivo di Manduria (an unexpected detour on the way to breakfast), celebrated Palin's ridiculous resignation, and am now listening to the band Mastadon's Leviathan: an album that sets Melville's Moby Dick (not verbatim) to their unique blend of heavy metal and southern rock. Anyway, let's get you some wines to pair with the grill that won't kill your wallet.

No matter where you shop, Primitivo and Salice Salentino wines will be less expensive than most wines. Their expressive characters make them great accompaniments to the 4th. It helps to have a Trader Joe's. Its the truth. Their selection of Primitivo and Salice Salentino is decent and few range over 4 bucks. These are wines that will hold up to ketchup, mustard, barbecue sauce, and even a vodka lemonade. Tuscan Moon's Sangiovese is another good match. Sans TJs, Cantele's Primitivo, Salice Salentino, and Negroamaro are sold in most wine stores, including BevMo, for around $8-10. For white, I'd head to New Zealand for Geisen's Savignon Blanc, a wonderfully crisp wine that'll pair well with fruit salads, pasta salads, macaroni and cheese, and popsicles and that won't break the bank.

Happy 4th Everyone!
Email Post
Mattie John Bamman
After more than a decade as a travel writer and restaurant critic, I moved to Maine with my wife to start a homestead. I created Ravenous Farmer to inspire others to live more sustainable and fulfilling lives.