Harvesting Grapes in the Rain 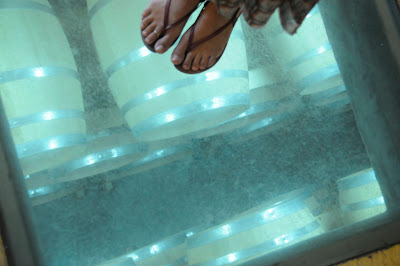 I took a brief vacation from By The Tun because my family is visiting. There was a lot I wanted to show them. September in Lecce seems to be a mix of warm winds, gentle rain, ferocious thunderstorms, and sometimes even blue skies. It's unpredictable, which makes it hard on the grape growers who want get their grapes into the wineries at their peak. 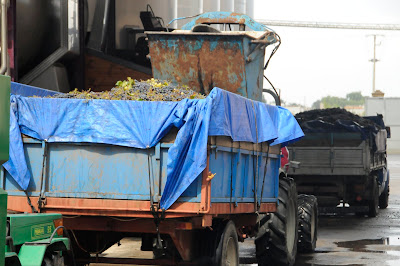 When I was a teenager, I harvested blueberries in Cherryfield, Maine; known to many as "The Blueberry Capital of the World." For three weeks each August I broke my back in the fields (I'm not sure if I could do as well now as when I was 15), and when it was all over, I had a good amount of money to spend on CDs, school clothes, and eventually, my first car. Rain was my enemy, because it meant that the raking crews (so called for using large rakes to pluck the berries) would be sent home and we wouldn't make any money that day. 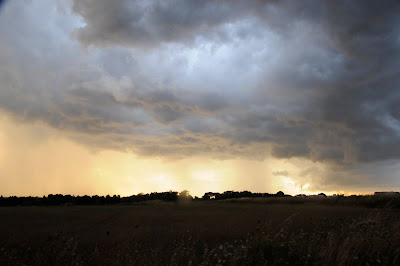 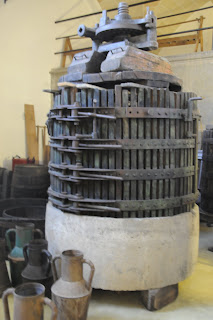 Most winemakers in Puglia are in the middle of harvesting their Primitivo grapes. The Chardonnay, Verdecca, and Fiano are long finished, and the Negroamaro will be harvested after the Primitivo. Rain makes it difficult to stay on schedule. It also heightens the threat of mildews and parasites. Fortunately, the rains this year are often short and are sometimes followed by a drying sun. These were the rains we prayed for when raking blueberries: all we had to do was hide beneath a few empty boxes for 20 minutes then we could get back to work.

Last Sunday was Puglia's Harvest Celebration, known as Benvenuta Vendemmia, but the rains were not short or gentle, though they did come and go. Just a few minutes of those harsh rains were enough to soak a field to the point of no return. The workers had to pack up their things and head home for the day. Sometimes it's as complicated as getting large mechanical harvesters stuck up to their axels in mud, such as those used by the massive Due Palme winery in San Marco. But it can also be as simple as wet feet and low visibility that puts a winery behind schedule. 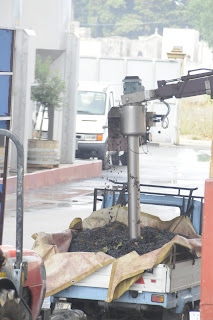 The harvest in Puglia should conclude around the 2nd week in October. I'll be speaking with winemakers throughout the region to provide you with the latest news on the 2009 vintage. Enjoy your fall! 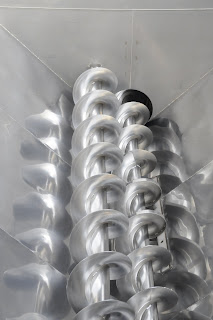