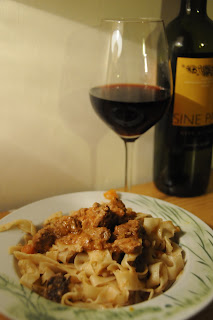 After drinking a bottle of Azienda Monaci's Simpotica--rich, chalky and beefy--at the Roof Garden Atlavilla restaurant, I wanted to try their other wines. My friend Andrew was still visiting from California so he, my girlfriend Kristin, and I decided to make traditional Bolognese meat sauce with homemade pasta using the official recipe. To pair with this meaty dish, I wanted a tannic, smooth wine using the Nero di Troia grape, and Azienda Monaci creates a wine that features the grape, 2005 "Sine Pari" (90% Nero di Troia, 10% Negroamaro).

Sine Pari is one of the most balanced and least agressively tannic Nero di Troia wines that I've had. That it was only a 2005 was surprising. It paired very well. When the Sine Pari ran out we opened one of most famous Primitivo di Manduria DOC wines, Consorzio Produttori Vini's 2006 "Lirica" (100% Primitivo). Full of juicy red fruit, the wine was very good. 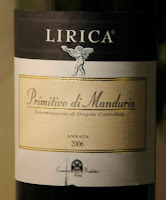 The nose was leather, plum, and smoke and the tannins were very round and soft. So, to say the least, I was greatly surprised by two wines that I wasn't expecting that much from. Azienda Monaci's consistency is currently at 100%.

The Bolognese sauce didn't turn out so well. I'd eaten Bolognese sauce in Bologna a few months ago and it was incredible: the main surprise was that the sauce seemed to be composed primarily of the juices and fat of the meat, not tomato, as it is served in most restaurants in the United States. Our sauce was a little lean, and I think it was a result of Puglia's style of meat, which focuses on the lean cuts. 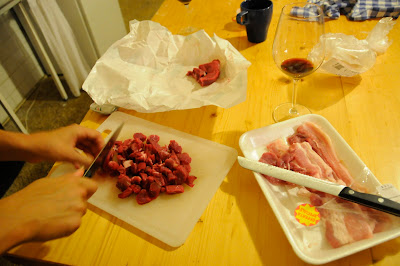 At the butcher, we asked which meat makes the best sauce. The butcher said that every Italian has their own opinion because different areas of Italy produce different cuts and flavors of meat. We should have known this, of course, because it is one of the greatest elements of Italian tradition: Keep it local. He told us the best cut for a Leccese sauce and we took it home with some pancetta. In the end, the sauce and homemade pasta were delicious, but not perfect: The sauce wasn't the meaty and--dare I say--greasy sauce I had up north. Next time, I might try hamburger meat. I was really against the idea but I think that Lecce puts all its fat in its hamburger. We'll see. Thanks for reading. Salute!