The Best White Wine in Italy?

Colli di Lapio’s 2008 Fiano di Avellino is an exceptionally well-concentrated wine that was recently called the best white wine in Italy by Gambero Rosso (Italy’s version of Food & Wine Magazine). I discovered it thanks to wine writer Tom Hyland (breaking news: Tom recently tried and reported on the 2009 at Vinitaly). As I was in Naples, I thought I’d try to find one of the few remaining bottles in Italy.

I went to Enoteca Dante in Naples, located in Piazza Dante. The salesman said, “Do you really need this wine? I have lots of other whites made with Fiano. How about this one?” But my girlfriend and I remained firm: We want the 2008 Colli di Lapio. It turned out the shelf was empty, but the salesman made a call. “How many bottles do you want?” One, we responded. He disappeared into the back of the store, cell phone plastered to his ear. A few minutes later he came out red in the face with a bottle of Colli di Lapio in his hand. I like to imagine that he broke into the storeowner’s private stash, securing one of the last bottles of the wine in all of Italy (and the world) for us.

So, is it really the best white wine in Italy?

It was Easter, and our hotel had a kitchen. We decided to cook up Spaghetti con Vongole e Cozze, or spaghetti with clams and mussels. After cleaning the shellfish and submerging them in seasoned water, we opened the wine. 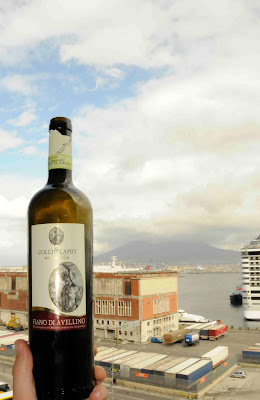 Yep. (Above: A view from our hotel room, with the wine and Mt. Vesuvius)

I cannot think of another wine in Italy that compares to Colli di Lapio’s 2008 Fiano di Avellino DOCG (100% Fiano). I am hardly an expert when it comes to having a countrywide perspective of Italy’s whites, but this wine is awesome. A complex nose of pineapple and even more complex layers of flavors that come to a climax (much like Vallone’s imprecable Graticciaia, which I recently tried) about ¾’s of the way through each sip. I really want to find a name for this effect. It’s like sticking your finger into a light socket. A warm metallic taste that comes with having your mind blown.


The story of a single sip: slight scent of pineapple, creamy beginning that gives way to a rush of tropical citrus with pin pricks of acid, then a veritable explosion of complex flavors (too many to name or distinctly pick out), and finally, a pithy, bitter finish that ends clean and dry.
Email Post
Mattie John Bamman
After more than a decade as a travel writer and restaurant critic, I moved to Maine with my wife to start a homestead. I created Ravenous Farmer to inspire others to live more sustainable and fulfilling lives.