In the sweaty months of July and August, as half of Italy descends on Puglia’s white sand beaches, the grapes cling to the vines in a stand-off against dehydration and parasites. The sunlight in Puglia, the primary contributor to the terroir of the region, is both the winemakers’ greatest friend and greatest enemy. Will prices rise because of low yields, or drop due to low demand? Which grape varieties thrived and will likely produce good wines, and which failed? These are the most important questions concerning the 2009 harvest.

The humid heat of August was oppressive as I walked among the tree-like vines of Primitivo, the grape that shares its DNA with California’s Zinfandel. Most of the winemakers I spoke with were 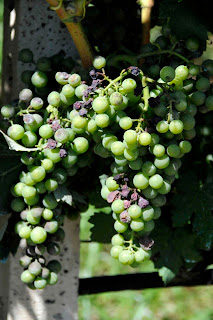 afraid of attacks by peronospora, oidium, and Botrytis cinerea, powdery molds caused by high moisture levels that destroy otherwise promising grapes. In the south of Puglia you find the Salento Peninsula, a strip of land 26 miles across, home to Puglia’s best-known growing region, Manduria. Attacks from parasites are usually deflected in this area by a strong, cool wind that whips off the Mediterranean Sea and across the thin peninsula, but in 2009 an uncharacteristic summer rain had put the health of the vines in jeopardy. The rain lasted from June 20th-July 7th in most areas, and it cooled the grapes so much as to slow their maturation. Rains at the very beginning of the growing season, back in April, had affected the initial germination of the grapes, and fewer flowers had turned into fruit. The sun, which usually threatens to over-ripen the grapes, hadn’t ripened them enough.

The harvest began one week later than in 2008 in order to give the grapes more time to mature. “The harvest this year is marche di leopardo,” reported winemaker Francesco Mocavero of Mocavero Winery, “which means ‘the spots of the leopard.’ It is a local saying that means that there are some areas yielding interesting, good-quality grapes, and there are others that are not.” 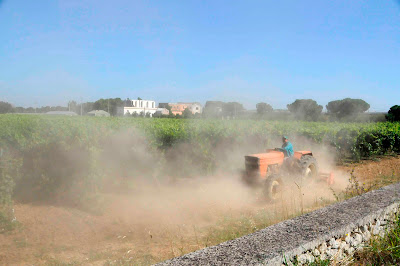 The grapes that thrived in the 2009 growing season were those that naturally mature the fastest. Primitivo, the region’s most important grape from a business perspective, is named for its ability to develop early: primo means “first” in Italian. The region’s undervalued white grape varieties were also coming through, particularly the Chardonnay and the native varieties Verdeca, Malvasia Bianca, and Fiano. “Chardonnay, Fiano, and Primitivo are having success because of good phenolic maturation, which was not affected by the June rain,” says enologist Elio Minoia 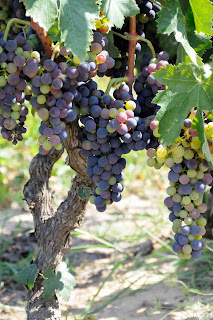 of Valle dell’Asso Winery. Sommelier Angela Venturi, Castel di Salve’s winery guide, reports that the “Santi Medici Bianco” (60% Verdeca 40% Malvasia Bianca), is “very balanced, not too alcoholic, fresh and crispy.” Tenute Rubino reports success with the Vermentino grape, which is a newly planted variety on the Rubino estate. Likewise, the quality of the Malvasia Bianca fruit—the white grape most commonly planted by the winery—is high because of even maturation.

Strangely, the very rains that threatened to ruin the 2009 vintage ultimately turned around and saved it . . . in spots, at least. “The reserve waters that accumulated during the autumn period, winter period, and spring period have allowed the vines to resist well in the hotter months of June, July, and August,” says enologist Angelo Maci of Due Palme. This enhanced the phenolic maturation—the maturation of the acids in the grape skins, which gives wine “good tannins,” resulting in positive qualities such as structure. This suggests that small, select productions of this year’s Primitivo wines will be good for aging. Almost every winery I spoke with is reporting small yields of excellent-quality Primitivo.

“The first svinature (devattings) of the Primitivo di Mandura DOC lead us to anticipate a good quality of future wines with square acids,” reports Racemi Winery. The winery is located in Manduria, an area with particularly rocky soil, and it looks like its terroir came through in the end. “On the whole, we can say that the year, which had hardly promised anything good . . . demonstrated the ability to improve in very little time, maintaining faith in the saying small but good.” I anticipate that many of Puglia’s Primitivo wines, especially those made in Manduria, will start becoming really interesting in 2014–2015. 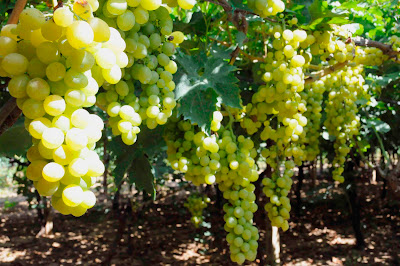 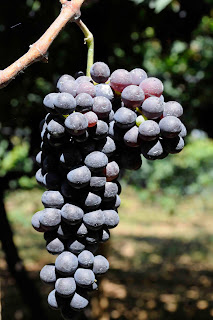 softer.” I expect the Primitivo wines from the southern part of Salento to be better young.

At the end of harvest, yields were way, way down overall, with Due Palme reporting a reduction of 50% from last year’s production. Tenute Rubino, at 10%, reports the least reduction. Most wineries report that yields are down by 30%. This is because the region’s most representative and widely planted grape, Negroamaro, is slow to mature, and it did not fare well in 2009. Negroamaro constitutes at least 70% of all the grapevines in Puglia, and it is usually the last grape harvested. This year, hordes of low-quality Negroamaro fruit were left clinging to the vines, and as a result, most winemakers will not make reserve wines in the 2009 vintage. Besides reserve wines, low yields of Negroamaro primarily affect vino sfuso, the region’s un-bottled pump wine, which fills the homes of the locals. Finally, Negroamaro is the primary grape used to make Puglia’s rosé wines, which are some of the best in Italy. 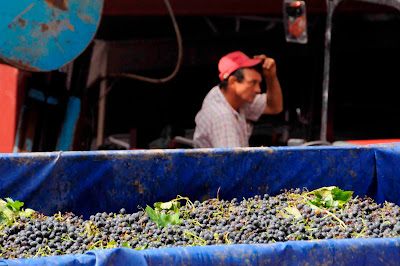 The question I posed to winemakers was whether low yields would result in higher prices. For now, it looks like most prices will stay the same. This is fortunate, considering that there will certainly be a lower production of rosés this year, which would suggest higher prices. Puglia is already recognized for creating inexpensive wines. Enologist Mascellani of Leone de Castris, a

winery that has been around since 1665, isn’t afraid to bide his time. The most important thing is “not to be too anxious to age the wine—not to push the process along—and to try to commercialize the wine when it has developed further, which will likely be slightly earlier than other years.”

I’d like to focus the rest of the report on Puglia’s lesser-known grape varieties: Aglianico, Ottavianello (the grape better known as Cinsault), and Susumaniello. Winemaker Gianni Cantele of Cantele Winery is one of several Puglian winemakers experimenting with Aglianico. The grape is capable of producing excellent wines, as proven in Basilicata and Campania. Says Cantele:

The grapes we use are partially sourced in Salento, but the main quantity comes from northern Puglia, in the Foggia area. The reputation of this area is not very good because it produces many average wines. However, in the last years a few growers are changing their views on viticulture, and a pleasant surprise will come from that area soon.

The main difference between northern and southern Puglia, in regard to growing conditions, is altitude. The north is higher, resulting in moister soils. Most of its rivers and streams are above ground, whereas the southern part of the region is fed by underground rivers that have carved into the limestone, the primary component of the area’s soil. 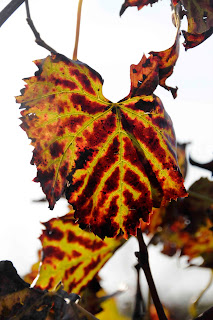 The last two grapes, Ottavianello and Susumaniello, have an ancient history in the Puglia region, and perhaps this history helped them adapt to this year’s difficult weather. With the exception of Chardonnay, non-native and international grape varieties suffered in comparison to the native varieties. This year, many wines made with foreign varieties will not be produced, including Castel di Salve’s “Il Volo di Alessandro” (100% Sangiovese).

This year’s Ottavianello is reported by Botrugno Winery, one of the leading producers of the grape, to have normal-sized yields of impressive quality. This is likely because it is one of the first grapes to mature. Susumaniello, even though is one of the slowest grapes to finish maturing, managed to have a good phenolic maturation. Winemaker Luigi Rubino reports that the rains in June and July naturally protected the grapes from the heat, saving the winery from having to use irrigation.

I won’t end this report definitively. This is one wonderful component of technology: the ability to continue dialogues. Feel free to contact me with questions and comments. It is difficult to find objective, firsthand accounts of this region’s wine scene, particularly in English. I am publishing this report just a few days before the beginning of Vinitaly, the largest wine event in the world, in order to give distributors, sommeliers, and wine writers a sampling of firsthand accounts of the 2009 growing season in Puglia. I’m interested in hearing your impressions of Puglia’s wines, 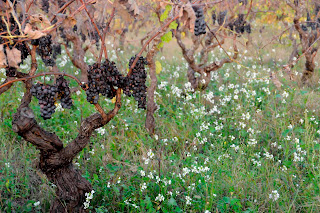 particularly how all of these environmental factors taste out of the bottle.

I would like to thank the winemakers, enologists, and winery representatives who gave me their time as well as the information that helped me to write this report: 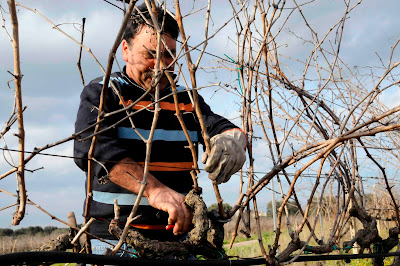 Vyvyan Brunst said…
Enjoyed this; valuable info for someone just getting interested in wines from this region. Curiosity was piqued by receiving several bottles of the Masseria Cavallo Negroamaro 2009 in an initial shipment from the Zagat wine club, and maintained by a group of (for me) lesser-known grape varieties. Am interested in inexpensive big reds from places off the beaten path, and your informed, detailed piece here is just the ticket. Managed to find La Quercia Aglianico (Antonio Lamona) and Accademia dei Racemi Anarkos (red blend, Malvasia Nera, Negroamaro, Primitivo?) locally in a search for 2009 Puglia wines. Looking forward to sampling.
March 6, 2011 at 10:32 AM

I'm glad the report could be of some help. I accidentally stumbled across Puglia several years ago and - coming from California - immediately fell in love with the big reds. Racemi's primitivo wines are very good, particularly the Filline. Also, Nero di Troia is a unique grape from Puglia that I highly recommend if you find it.

If you ever find yourself there, I wrote a blog post on wine tasting in Puglia. It could be of some help (the tourism infrastructure is still pretty elementary).