I got an unexpected invite to Nostrana Restaurant's Olio Nuovo Wine Dinner last week, and this surprise was followed by another: Olio Nuovo, literally "new oil," turns out to be olive oil par excellence. Having never even heard of olio nuovo before, I had to be enlightened. Olive Oil Sommelier Jeff Bergman explained that olio nuovo is olive oil that was pressed less than 90 days ago. Just like novello or beaujolais wine, young olive oil tastes astonishingly fresh. Most olive oil producers complete their first harvest, commonly known as the green harvest, at the end of September, and right now is the time for olio nuovo.

Cathy Whims, Nostrana owner and James Beard Best Chef 2011 Finalist, worked with Jeff to create a three-way pairing (I still can't decide if this term is an oxymoron). Each course featured an Italian dish, a new olive oil, and a wine. The first course was one of my favorites: beef carpaccio with fried capers, celery leaves, and shaved parmigiano topped with Frescobaldi's "Laudemio First Pressing" olive oil. This was paired with Kante's NV "KK" Brut. The dish was refreshing; the sweet Karst beef was given great texture by the fried capers and celery leaves; the Frescobaldi olive oil, which is filtered, tasted grassy and slightly of lemon. Unlike regular carpaccio, this carpaccio writhed in oil. Oil dripped from each forkful. I could feel the health benefits. My skin felt better—my hair shiner. The Kante KK Brut tasted of almonds, caramel, and toast. 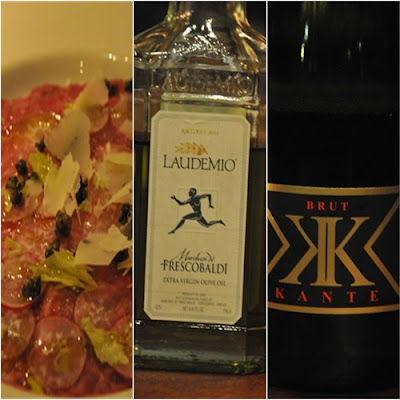 "We all drank rancid oil 25 years ago," said Jeff. "Freshness wasn't valued the way it is today. Those were the days when a farmer would put his nets under the tree then back his truck into the tree. Maybe five days later he'd take the olives to the cooperative for pressing, and by then they'd be dried up and in terrible shape." A few years ago, when I spoke with Raffaele Cazzetta, owner of Cazzetta Olive Oil Factory, he explained that the flavor of the olive drastically changes if it isn't processed within two hours of picking. The longer the olive stays on the ground, the more acidic it becomes, and better olive oils are less acidic (the quality label, extra virgin, is partially determined by low acidity). Thanks to technology and awareness, the quality of olive oil is easy to control. "Now producers focus on finessing," said Jeff.

The next course was a fried, cake-like version of ribollita, which we doused in Capezzana's Olio Nuovo 2011 from Tuscany and paired with Capezzana's 2008 "Barco Reale di Carmignano." Also known as third-day ribollita, the ribollita cake was crunchy on the outside but moist and soupy on the inside. If you make ribollita soup at home and you ever find that it's become too thick, try scooping it into cakes and frying it: the texture is amazing. 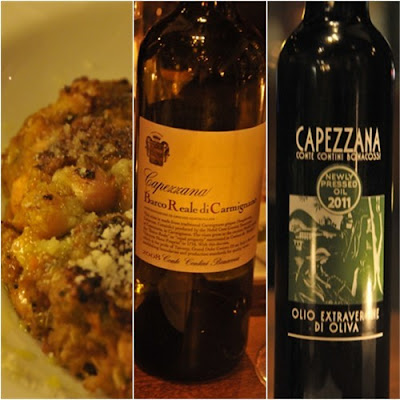 I think I used half a bottle of Capezzana's olive oil. It was spicy, grassy, and nutty, and neither I nor the bread in the ribollita could reach our saturation. Grassiness is definitely the most discernible characteristic of olio nuovo—just like freshly cut grass. The 2008 "Barco Reale di Carmignano" was also excellent. Made of sangiovese, cabernet sauvignon, and canaiolo, the wine had aromas of plum and lavender. I tasted dark fruit, cedar, and a controlled, pleasant barnyardiness. I liked it because it was a stolid wine, capable of pairing with hearty food. It retails around $14.

The main course was grilled calamari with chickpeas, fennel, lemon, and Tremiti olives, topped with Gianfranco Becchina's Olio Verde and paired with Occhipinti's 2010 "SP68." The Gianfranco Becchina Olio Verde is unfiltered and made from just one type of olive: Nocellara del Belice. Again, there was a hyper-real spiciness and grassiness. 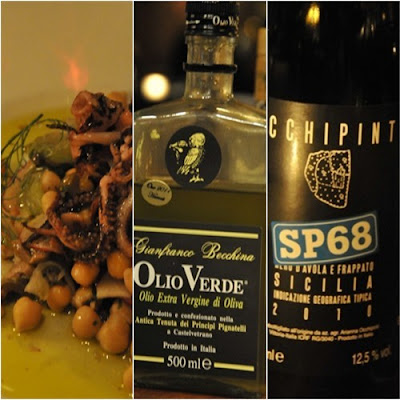 Chef Cathy Whims was particularly excited about Occhipinti winery, and she explained that the winemaker, Arianna Occhipinti, began her winemaking career around age 19. Today, Arianna makes wines with biodynamic farming practices and without adding sulfites. The purity of the SP68 was its foremost quality. It was made of Nero D'Avola and Frappato (another native Sicilian grape), and I was surprised by how light it was; I wouldn't have guessed it had Nero D'Avola in it. It tasted fresh and fruity with aromas of fennel, lemon, and celery. Because it tasted brand new, it paired well with the new olive oil. However, while the SP68 seemed like a fine wine, I couldn't see how it would make a winemaker famous. Then Cathy brought out Occhipinti's 2009 "Il Frappato." This wine shocked me, and there's no other way to say it than that it tasted alive. Sort of a corpulent pinot noir, Il Frappato had aromas of fresh raspberries, and I tasted red fruit and candy. 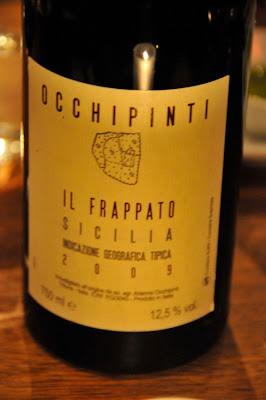 The wine dinner concluded with an olive oil torta with poached apricots and citrus zests and almond cream paired with the 2007 La Stoppa "Vigna del Volta" Malvasia di Candia Passito made by winemaker Elena Pantaleoni. The torta made using Frescobaldi's "Laudemio" and was very light, as was the passito, which tasted of apricots and honey. 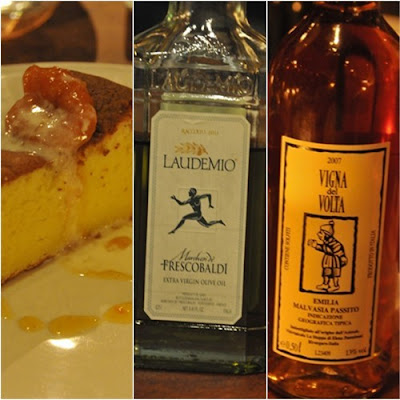