From the Awesome Wine Tasting and Review Department 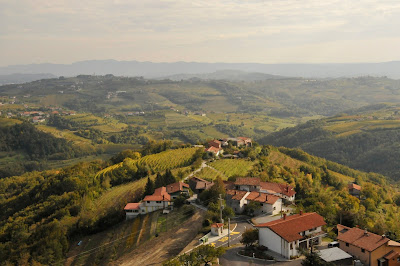 Slovenia’s Goriska Brda is a hidden wine region: neighboring Friuli gets all the press. Yet, when I went wine tasting, it was impossible to tell where Goriska Brda ended and Friuli began. The boundary between Slovenia and Italy was determined, somewhat arbitrarily, by pissed off partisan fighters at the end of 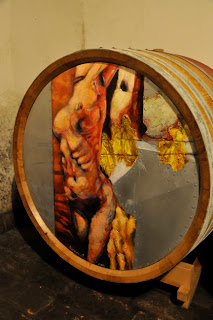 World War II, and, today, Italy and Slovenia zigzag together across the beautiful rolling hills of vineyards. Goriska Brda and Friuli are two puzzle pieces locked together.

I visited Ščurek winery on the advice of Šime, chef and sommelier at Gastronomadi Klub in Zagreb, Croatia, where I’d taken a cooking class. The winery had a uniquely young and rebellious ambiance. In the entrance, there was a photo of winemaker Tomaz Ščurek, reclined, wearing skateshoes and using a case of wine as an ottoman. In the cellar, the heads of several wine barrels featured paintings by artists and friends from all over the world, many reminding me of the vibrant works of San Francisco’s street artists. The winery gave off a rock’n’roll attitude. It made me think of contemporary winemakers Adrianna Occhipinti, Charles Smith, and Christian Tietje. Would the wines taste rebellious, too? 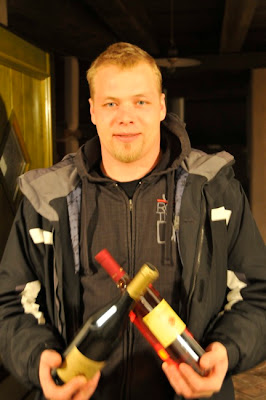 Tomaz was busy working late in the cellar when I arrived, and I waited while he change out of his grape-stained clothes. That done, he took me into the family’s original wine cellar, which looked like an 18th century farmhouse, except all of the furniture had been replaced with wine barrels.

“We experimented with bottling in 1989,” said Tomaz, “and the first real bottling was in 1991. However, we have tax documents that show the family was making wine back to 1853."

Tomaz was quick to point out that the tax documents were written in multiple languages in the 1800s. The region’s identity was clearly multifaceted even then, and Goriska Brda has changed nationalities five times in the last 150 years. It was good to see that Tomaz and his family didn’t suffer from a similar lost of identity.

“This wine cellar is probably older than the state of Oregon,” he added. 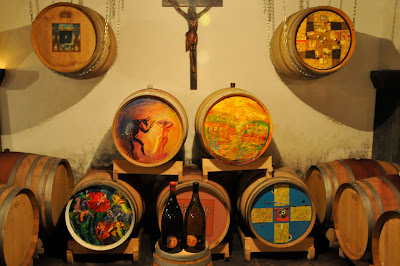 We went into the wine tasting room, which had giant windows that looked out onto the valley and its vineyards, the rich yellow and orange foliage in full effect. The first wine I tasted was the 2010 Strune Belo (belo = white). Strune is a budget friendly line of wines that begins at 4.50€ a bottle. The 2010 Strune Belo had a nice floral and fruity nose and was smooth in the mouth. It wouldn’t have been anything special if it weren’t for the price. At 4.50€ a bottle, it was an outstanding value.

Next came the 2010 Rumera Rebula, made of 100% rebula. This white grape is widely planted in Goriska Brda as well as Friuli, where it is known as ribolla gialla, and it is rarely found elsewhere. It has an ancient history but was hardly planted twenty years ago; the resurgence it is experiencing today is greatly due to its ability to age well. Ščurek’s medium-bodied Rumera Rebula wasn’t my style. It had some round yellow fruit, but I found a nutty flavor that was too pervasive and thought that the wine finished hard. Likely, it needed to age another few years. I was beginning to worry that I might not be a fan of Ščurek’s wines.

Then came the 2009 Pinot Gris (Sivi Pinot), a delicious summer wine—it had a striking copper color in the glass and I got a lot of ripe fruit on the nose. My palate really freaked when I tried the 2009 Stara Brajda Belo. As the website says, it is made with “60% Rebula, 20% Pikolit, 20% Pika and some Glera, Tržarka and Malvasia,” and I got aromas of tropical fruit, sage, cashews, and wild chamomile. The wine was full bodied. The acidity almost prickled my tongue, and I could tell that this would smooth out in a few years, allowing complex flavors to develop and emerge.

The last white I tried was the 2009 Dugo, comprised of 50% rebula, 25% chardonnay, and 25% pinot blanc. It deserved to be last because it tasted like royalty. It was rich with oak and vanilla nuances, and it had great depth. I tasted butterscotch candy and dried flowers. I could have sat with the bottle for the whole night writing out descriptions and inspirations. In general, I really enjoyed Ščurek’s blended wines over the varietals because they displayed flavors that totally shocked me: I believe that these wines cannot be produced anywhere else on earth than Goriska Brda.

In general, winemakers in the Goriska Brda region make mostly white wines, however, that doesn’t mean that the reds should be discredited. On the contrary, the 2006 Pinot Noir (Modri Pinot) was one of my favorite wines during the tasting. Very elegant, with aromas of cloves and plums, it was light bodied and sleek. I tasted plum, ripe cherry, and cedarwood, and it was very well balanced.

Next I tried a blend of merlot (75%) and cabernet sauvignon (15%) that was part of the winery’s “Up” line. The 2006 Up had aromas of blackberries and plums, and I tasted lots of fruit, such as blackberry jam, and it had cola

notes. The finish was long with a powerful pepperiness. For all its strength, the wine was still friendly.

Ščurek tasting room is open year round for wine tasting. Appointments are necessary. Closed Sundays. Email Tomaz at scurek.stojan@siol.net a few days in advance. A wine tasting costs 7€, or you can have it with local meats and cheeses for 15€.

Mattie John Bamman said…
Thank you, CA Wine of the Month Club. I actually did give this blog post to the members of my family for Christmas. They seemed to enjoy it. They gave very thoughtful comments.
December 27, 2011 at 2:04 PM