The last time I visited Seattle was almost two years ago when I was covering the Seattle Tattoo Convention for Total Tattoo magazine; I had an unbelievable blast involving legendary ink, cigars, and mini donuts. Last weekend, my sister and her boyfriend Patrick came to Portland to visit, shaking me out of my Portlandious mindset. Patrick and I went to five awesome bars, including a speakeasy and the oldest bar in Seattle. The story below doubles as a practical guide for anyone trying to figure out what not to do in Seattle on a cold night. Ok, maybe there are one or two good suggestions... If you keep reading, you'll also find out why Seattle is one scary town. 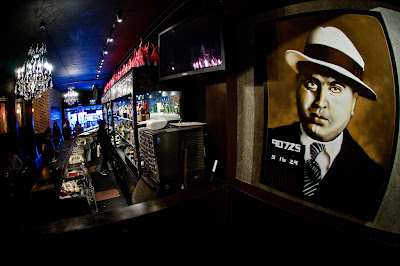 Located on 2nd Street between Bell and Blanchard in the Belltown neighborhood, this place is surrounded by bars with gaudy themes, such as the tiki-themed Lava Lounge and arcade-themed Shorty's bar. Patrick and I went into JUJU because it had a skull over the doorway, which was comparatively tasteful. Inside, I expected Napalm Death or Metallica but found Van Morrison. Still, the bartender was friendly and we ordered two Manny's. Manny's is likely Seattle's best-loved beer and I'm with 'em; our bill came to $5.75 total (just try to divide that by two). The reason to visit this bar is the exceptional artwork by Joey Nix: this guy spray paints portraits of famous criminals, such as Al Capone and Sid Vicious, that are realistic and emotionally present. Then, to top it all off, there are giant paintings of freight trains tearing across deserts and shooting a complex mix of smoke and skulls out of their smokestacks. I'm not sure if this work is also by Joey Nix. (Awesome photo above by Slightlynorth). 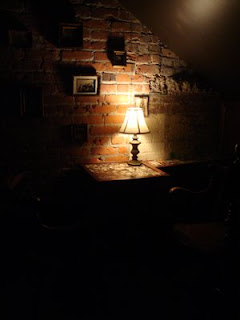 This place bills itself as a speakeasy and this means that there's no sign. Just walk down the dark, creepy alleyway between 1st and 2nd street on Blanchard and look for the big wooden door. Inside, we found a quiet, intimate atmosphere. Several couples quietly sipped spirits. This is the place to take a girl on the first date: it shows that you are a connoisseur both of Seattle and fine alcohols. The menu was long, so Patrick and I told the bartender our preferred spirits and price range. I was served an awesome apple brandy for eight bucks that I wish I could remember the name of. (Photo above by Holly K.)

3rd Stop: Shorty's
At this point, the Oscars were almost over and our girlfriends probably wanted us to come back to the hotel so that we could all get dinner. Because we weren't 100% sure of this, we decided to go to Shorty's, the arcade-themed bar. With a huge room full of pinball machines in back, this bar is great for people who don't want to talk to each other or focus too much on what they're drinking.

Surprisingly, I met a fellow Portlander. We stepped out for a smoke. He told me that the prior night had been the craziest of his entire life. He'd blacked out and wandered Seattle until dawn. Several hours later, in the middle of the afternoon, he was about to get jumped by four guys when one of the guys called it off. "Don't you remember me from last night," the guy inquired? My fellow Portlander did not remember the guy, but it saved him a crack on the skull and his wallet. After he told this story, a homeless man walked up to us and asked for a cigarette. The homeless man said that Belltown was his neighborhood. "I remember when there wasn't anything but Indians." Then a pretty girl walked up and my fellow Portlander got to talking to her. Turned out that she'd been mugged this week for the first time. She said, "I couldn't see straight for days."

4th Stop: Double Header
Patrick and I picked up the girls, and we all went to eat at the delicious Jade Chinese food restaurant. Afterward, we walked toward Double Header, located in the International neighborhood on Pioneer Square. We'd heard about this bar from the man pouring wine at the complimentary wine tasting at our hotel. He said that Double Header is the oldest bar in Seattle and that it's a good place to go if you don't mind being surrounded by 60-year-old men who've been drinking since noon. For some reason we thought this would be a good idea, but when we got there it was closed.

5th Stop: Central Saloon
So now we're walking around a shady neighborhood and intermittently passing empty nightclubs blasting terrible music. Fortunately, we see the Central Saloon, and, after having our IDs very carefully checked by a man wearing a gun and holster, we find darkness, a few sulking drinkers, and Metallica playing. The bartender was friendly and the drinks were good. However, the bar had terrible Feng Shui, and about 75% of it was filled with un-used furniture turned up side down. I felt like I was drinking in the basement of a rec hall.

After six hours of bar hopping in Seattle, I believe the wild wild west is still off its rocker. If you are going to San Francisco, wear a flower in your hair. If you are going to Seattle, wear a gun.
Email Post
Mattie John Bamman
After more than a decade as a travel writer and restaurant critic, I moved to Maine with my wife to start a homestead. I created Ravenous Farmer to inspire others to live more sustainable and fulfilling lives.

Mattie John Bamman said…
Thanks Nubian! After your adventures in South Africa, I could say the same to you. Or maybe I'm just reading too much Rian Malan...
March 4, 2012 at 12:56 PM