Living the American Dream in Italy, 1954 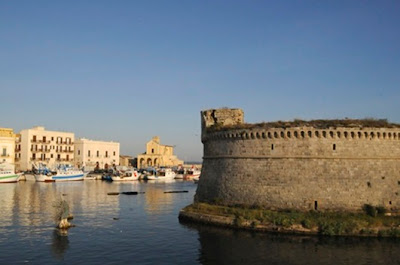 I drank Mjere rosso for the first time in the coastal town of Gallipoli, Italy. Located on a tiny fortified island, Gallipoli serves a great aperitivo. Each summer night, the lounges set their patio sofas, chairs, and tables along the fortified walls and serve a buffet of traditional foods. My girlfriend and I would find a cushioned seat among bleached, white canopies and cacti and order wine and watch the sun set. 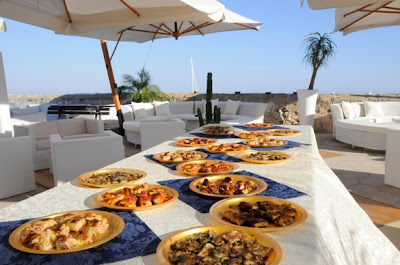 That evening, we ordered a liter of local wine, but the restaurant was newly opened and didn't have any on hand. As an alternative, the waitress poured a bottle and a third of Mjere rosso into a 1L carafe. She charge us almost nothing, and made a point of saying, "this is a very good wine." Dark, full-bodied, rich, and dry, it was delicious. When we asked to see the wine label, the waitress slapped it onto the carafe, using the condensation as glue.

After living in Italy for a year and a half, my first stop home was to see my sister in Boston. She managed the bakery at Sportello restaurant, and, to my surprise, she was pouring Mjere. I wrote a blog post about it, and Giorgio Caló, the third generation of the Caló family interested in winemaking, contacted me. Over time we became friends, and he shared his family's story, one rife with sorrow as well as good fortune. 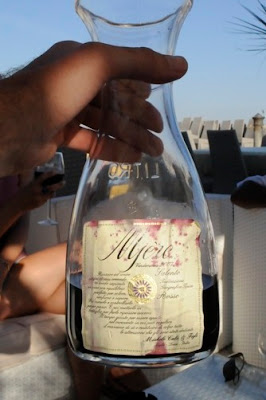 Historically, the Puglia region in southern Italy has been one of the poorest parts of Europe. Giorgio told me that his grandfather, Michele, had to leave Puglia to work in a coal mine on the Belgian-French border. It was 1947—Michele was 20 at the time—and his dream was to open a winery. Michele saved and saved over five years of hard labor, and, in 1954, he realized his dream: he opened Michele Caló & Figli (figli means sons) in the town of Tuglie, near Gallipoli. 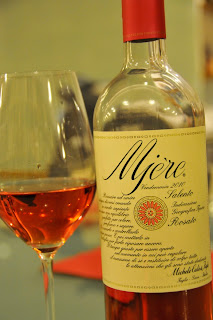 Puglia has always been a land flooded with wine, and Michele knew that he couldn't find his fortune locally. Times were hard in Puglia, and people were moving north to find work. It was the post-WWII period known as miracolo economico (the Italian economic miracle), and many factories were opening in northern Italy, from Fiat and Ferrari to the high-fashion clothing and shoe factories. Masonry was a particularly common profession among Pugliese. Michele thought he could sell his wine in northern Italy, and , for the second time in his life, left his home with almost nothing.

At first, he sold his wine directly to people without a middleman. Because the wine was good and because the many Pugliese who had relocated north wanted a taste of home, his wine was a success, then he began selling it to wine shops, too. This prosperity continued, and the family purchased a home in Arluno, a town just outside of Milan, and opened a wine store and selling point. Michele regularly traveled the 664 miles between Tuglie and Milan. It was around 1957, and there were no planes, and I can only imagine those long drives on bad roads hauling tanks of wine. 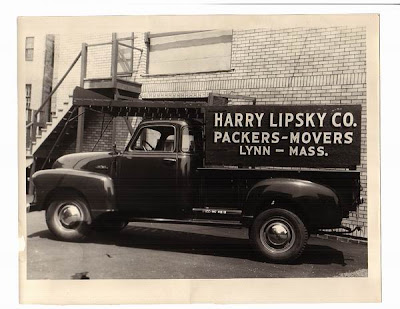 When Giorgio's father, Fernando, and uncle, Giovanni, came of age, they joined the family business, and 1972 marks the winery's first bottling. Michele had always made wine with Puglia's native grapes, primtivo, negroamaro, malvasia nera, and verdeca. Puglia is famous for its rosés, and Mjere rosso (red) and rosato (rosé) were made by combining negroamaro with malvasia nera. In 2010, I put the 2009 Mjere rosato on the top of a list of Top 5 Rosés from Puglia. It has a strong acidity, giving it backbone, and gentle pomegranite aromas that I found inseparable with my memories of riding through Puglia's countryside on a bicycle and stopping to pick pomegranites along the way.

Giorgio was born in Arluno, and he grew up spending his summers in Puglia. Recently he has taken an interest in the family business, but it was never pushed upon him. His father usually spends three months at the winery each year, and Giorgio has worked in the winery as well as helped establish the wineries PR. "I'm interested in building relationships with people," he said, "and recently even winemaking." It wasn't until I visited him in Arluno that I discovered that he was 18.

When we arrived, Giorgio welcomed my girlfriend, my friend Paolo, and I with a tasting of the recent vintage. Then Giorgio's father arrived, and we talked casually in broken Italian and broken English. (PHOTO: Fernando, me, and Giorgio in their enoteca outside Milan.) 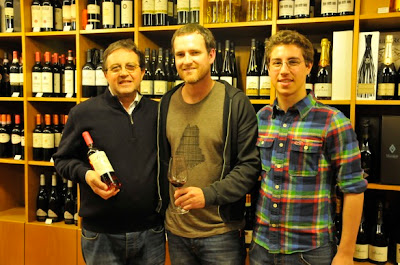 These days, Mjere rosso is almost as common in the United States as in Puglia. In Portland, Oregon, local sommeliers at celebrated restaurants, such as Le Pigeon, Nostrana, and Oven & Shaker, are serving it by the glass, and it's sold in wine stores, such as Pastaworks. 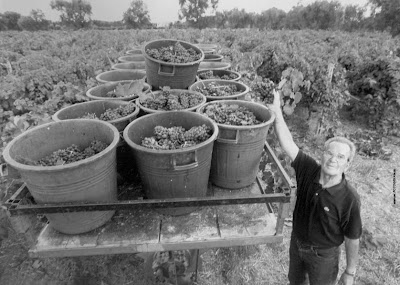 Last month, Michele Caló died at the age of 84. He'd started with nothing and left the world with grandchildren and an internationally known winery. In Italy, times are hard again—not only in Puglia, but everywhere. The tourism industry is lagging and the politicians are corrupt. Giorgio has a family business that he can work in if he so wishes. It means all the more that we can feel and taste the family's heritage with each sip of their wine. 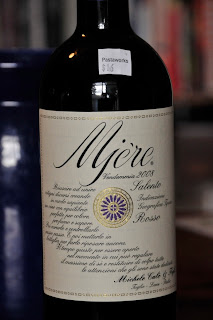 Dry and full-bodied. Nose of dark fruit and little vanilla and rosemary. On the palate, the fruit is there but subdued, and the overall effect is of a well-balanced wine with just enough tannins and acidity to make it a food wine. I tasted cedarwood and lavender with notes of dried cherry and cloves on the finish. The wine is smooth except for the finish, which has a nice bitterness. This wine is mature (ready to drink now). The first bottle I purchased was corked and had to be returned. Highly recommend decanting two hours before drinking. After drinking this delicious bottle, I had to shake my head at the low price. This is what Pugliese wine is all about.
Email Post
Mattie John Bamman
After more than a decade as a travel writer and restaurant critic, I moved to Maine with my wife to start a homestead. I created Ravenous Farmer to inspire others to live more sustainable and fulfilling lives.

TrendyTripping said…
Italy is such a beautiful country! Great article about the wine.
March 31, 2012 at 9:40 PM