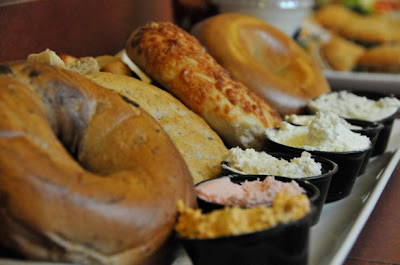 If you've been following along, you know that I've been drinking wine first thing in the morning, but I do in fact typically prefer a good cup of coffee. Einstein Bros. is releasing two new coffees, and Watershed was kind enough to invite me to the Einstein Bros. media tasting at Public Domaine coffee shop in downtown Portland. 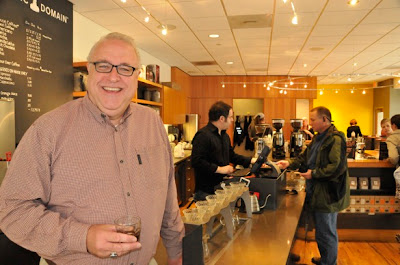 Over a cappuccino made with the new Espresso Blend, Bruce Mullins of Coffee Bean International—who carries the awesome professional title of VP of Coffee Culture—explained the ins and outs of designing a coffee blend. He said that one of the most difficult aspects of designing a coffee blend is securing a consistent supply of coffee beans. The Einstein Bros. Espresso Blend is composed of coffee beans from South America, Central America, and Indonesia, and, just like a good red wine blend, each of the components in a coffee blend adds a particular quality, such as body, acidity, or aroma. 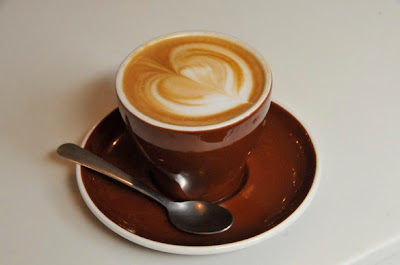 I should have been asking coffee-related questions at this point, but I was fully absorbed in the rich, dark flavors of the cappuccino in front of me (made with the new Espresso Blend). The coffee was impressively rich and dark without being bitter. It was robust without having rough edges. It was delicious.

After a few sips, I asked Bruce what makes a coffee taste bitter. He said that coffee beans grown at higher elevations are sometimes more bitter, and that coffee beans that are too finely ground can sometimes taste bitter. Then he brought up the dreaded stinker bean. After coffee beans are harvested, they are fermented (just like wine), typically by yeasts. Sometimes a bean ferments for too long, and this bean develops negatives flavors and aromas, from bitterness to moldy stinkiness. One stinker bean can actually ruin and entire bag of coffee. 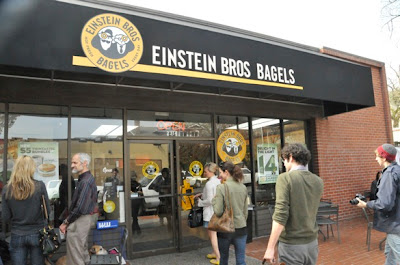 To pair the coffees with menu items, we rolled out to the 2314 NW Lovejoy Einstein Bros. location. Angela Proctor, Director of Marketing at Einstein Noah Restaurant Group, Inc., and Chef Chad Thomspon welcomed us with a smorgasbord of menu items, including menu items off the Smart Menu. I was happily surprised to discover that my favorite menu items were healthy menu items, and I have to hand it to Chef Chad Thompson and his team for creating such flavorful and fresh options. 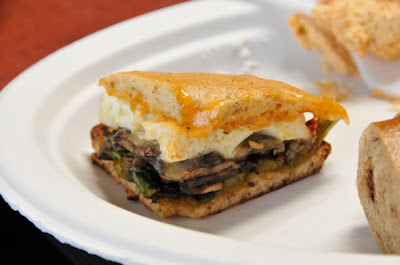 The Bagel Thin Eggwhites, which are served on bagels that look like they've gone on a diet, come in two styles, and I highly recommend grabbing the Asparagus, Mushroom, and Swiss ($4.50 - pictured above). The asparagus is crunchy and we all know what happens when Swiss and mushrooms are put together! When so many coffee shops stick to pastries and donuts, Einstein Bros. supplies a long list of healthy and delicious options (in fact, 30-40% of the menu is healthy). Other knock-outs included the Chipotle Chicken Chopped Salad, which features the signature chipotle dressing; the numerous schmears for the bagels, including the surprisingly spicy Jalapeno Salsa schmear; and the Cinnamon Walnut Strudel (hey, you can't eat healthy all the time!). 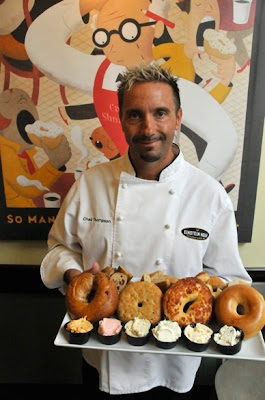 Nubian said…
I do love Einsteins. Noah's bagels just made the switch over in Corvallis. I miss their Autumn blend that they would have in the fall.
April 16, 2012 at 9:16 PM