Amongst the thundering whacks of the cleaver, exclamations in Italian, and various cuts of meat (including a whole pig's head set to one side of the butcher block that had had its hair burned off using a plumber's blowtorch), a crowd of reporters and chefs tried to comprehend the larger-than-life, eighth-generation Tuscan butcher, Dario Cecchini. Dario came to Portland Oregon at the behest of James Beard Award Finalist, Cathy Whims—chef at Nostrana restaurant—and the demonstration was streamed live on the restaurant's website. Dario is famous for shouting "Butchers of the world unite!" and I was immediately overwhelmed by the beauty of his mind and his philosophies toward food and life.

"It is a pleasure to work with this meat. When an animal is raised well, it is easy to cut; it is not compact," said Dario, as he carefully extracted each of the ribs from the loin and side—the room filling with the sound of bones cracking. The pig was supplied by Square Peg Farms, and, during the last eight weeks of its life, it had been fed plenty of chestnuts. Dario seemed impressed with the ingredients supplied by Chef Whims overall, also complimenting the local rosemary, and he clearly was passionate about the quality of the animals that he worked with as well as the quality of the lives they led. "I don't really care so much about which breed of pig I work with—I'm not a racist. They tried to make the best breed of human and that didn't work well. Being happy is the best race, and it makes the best meat, too!"

Dario is from the town of Panzano, located in the Chianti region in Tuscany. If you've ever gone wine tasting in Chianti, you've likely driven past Dario's butcher shop, Antica Macelleria Cecchini, and restaurant, Solociccia (meaning only meat), which welcomes guests year round. 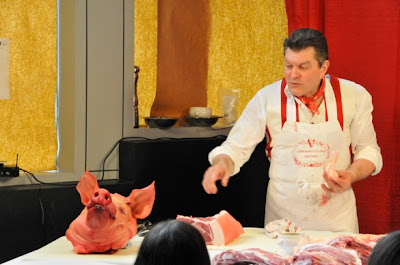 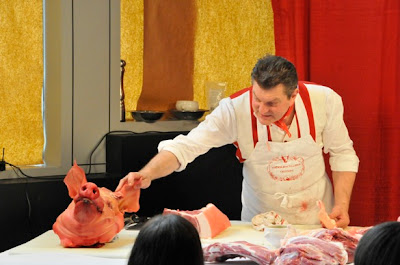 Dario has dedicated his life to discovering the best ways to butcher an animal and the best ways to cook the resulting cuts. Ripping a huge slab of fat (lardo) off of the quarter pig in front of him with his bare hands—the ripping sound like extracting Scotch tape—Dario said that guanciale (pig cheek and part of the neck) is one of his favorite cuts. "It is lardo and pancetta in one," he says, as he points to the marbling. I first learned of Dario when reading the book Heat by Bill Buford. In the book, Bill travels to Tuscany and throws himself at Dario's feet, begging for an apprenticeship. Dario clearly wants to teach people about butchery, but he doesn't want to give us a single cut: he wants to teach us to cut. "The spirit of this lesson is not to show you how to cook each part, but to give a perspective of the animal," he said. "To learn a language you must learn the alphabet. Guanciale is the alphabet. Too few people in the food world do not learn the alphabet." 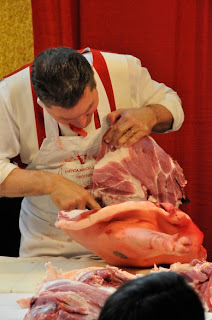 I decided to eat red meat because of men like Dario. I was raised vegetarian and rarely ate red meat until I visited Italy in 2006. Suddenly, I was surrounded by meats that showed respect for the animals. For example, the care that is put into making a leg of prosciutto boggles my mind: The animal is raised on a very specific diet, slaughtered at a particular time of year, and then the meat is cured over months and sometimes years. In Italy, I put my grievances with hamburgers aside and became a ravenous red-meat eater! Dario focuses on understanding every portion of the animal and making each part taste delicious. During the question portion of the demonstration, I asked, "So, are hot dogs a good or a bad thing? They use less common cuts of meat but they are made on an industrial scale." Dario responded, "Hot dogs were once a good thing. It's great to learn other people's cultures, such as hot dogs. But, when quantity goes up the quality comes down." And that might just sum up my entire relationship with meat. 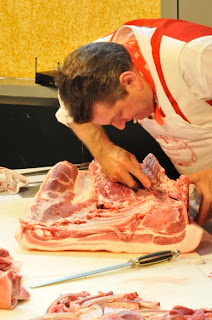 At the end of the demonstration, Dario said that he wants to bring about a Renaissance in meat. He suggested that vegans and vegetarians are very loud about their preferences, but that carnivores are very quiet. "I have no intention of being quiet," he said. He thinks that butchers should rise up against the industrial companies that sell mass-produced meat—many of which only use select parts of the animal. "If you are an artisan and you use all of the animal you have complete control," he said.

I asked Lisa Marcus, assistant to Chef Whims, what Dario wanted to do while he was in Portland. "After this, he wants to check out some of the food carts," she said.

Here are a few tips that I learned from Dario for all you aspiring butchers and chefs (I recommend watching the video above though, to hear them from the man himself): 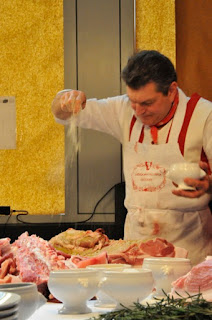 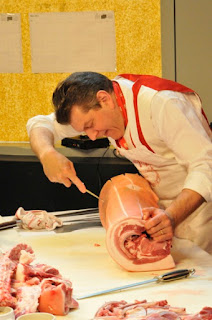 1. Pork is a tough meat, so, in Italy, it is traditionally served with herbs that aid digestion. Dario used so much fennel flower!
2. Dario likes to cook what looked like a pork shoulder roast for 3-4 hours at 375 degrees F.
3. Dario salts and ages many of the cuts for 4-5 days before cooking.
4. When he cooks meat in wine, he uses wine that has zero additives and that hasn't been aged in wood
5. Using a plumber's blowtorch to remove the hair from an animal is very effective; it also makes the skin nice and crispy!

Mattie John Bamman said…
That's a good question, because I didn't attend the dinner. Dario showed us how to age guanciale by salting and drying it: this produces a powerfully flavored meat, and a little goes a long way. I used dried guanciale to make spaghetti carbonara and amatriciana. Dario also showed us his specialty, called Arista, which is similar to porchetta. With porchetta, you more or less debone an entire pig then stuff it with herbs, roast it, then serve the whole thing up in sandwiches. Dario uses the same concept, only he only uses the side and loin of the pig (he skips the head and rear of the animal). He salts and peppers it then stuffs it with thyme, garlic, fennel flower, and rosemary (this is what Dario's doing in the bottom 3 photos). He serves it alone or with beans: who needs bread!
April 24, 2012 at 10:15 AM

Anonymous said…
Good post. I learn something totally new and challenging on blogs I stumbleupon every day.
It will always be useful to read articles from other authors and
use a little something from their websites.