The largest biodynamic and organic-certified winery in Oregon, Montinore Estate is one of the top 25 wine producers by volume in the state, and it's wines are distinctly different from those of other wineries. 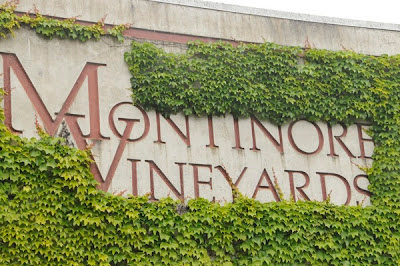 During a private tour with winemaker Ben Thomas, we walked the 650-acre estate of rolling hills, untended swatches of native plants, beautiful vineyards, and winery facilities and heard his take on biodynamic wines. Ben said that the winery uses native yeasts whenever possible; this means that the winery ferments its grapes using yeasts already present in the environment. The winery actually collects these yeasts from the air, and then cultivates them on large, petri-like dishes. Then, they test each yeast with the grapes to choose the best.


As we walked a driveway with hundred-year-old maple trees along either side, Ben explained why he likes native yeasts. He said that, in general, they have broader flavors; more aromatics; and more earthy flavors. I found this interesting since I'd just tasted through several of the winery's white wines and found most of them lacked clear identities. The aromas were not sharp; seemingly flabby. Was this what he meant by "broad?" Since so many people love Montinore wines, I'm going to have to guess that this is the case—at least regarding the whites.

Warm and dry inside, we tasted Montinore's red wines. The reds did have huge noses on them, and they were nice and balanced on the palate. In short, I vastly preferred the reds to the whites.

See what you think: Montinore is open for tastings daily, and you can taste five wines for $5 (fee refunded with purchase). Look out for these standout wines:
Portions of this article included information obtained during a press trip funded by the Washington County tourism board.

Wine Harlots said…
That was kind of mean!
Or at least a little passive-aggressive.
I remember that you were a nice drunk -- what gives?

Mattie John Bamman said…
Haha, giving my honest opinion on a wine is mean? Hmm, not sure about that.

Anonymous said…
(Thank you for sticking up for us, Nanette.)

Making wine is in some ways like creating art. That sounds pretentious, but what I mean is that when one creates a subjective product they are inherently asking for feedback from others. We can't possibly expect only good returns.

That said, I hope you get a chance to re-taste our whites one day. I do think it's true that native yeast fermentations seem to have less of an immediate fruit impact. That may come across at first as reflecting less varietal character, but consider the same wine paired with food. I'm constantly experimenting with combinations of different wine and different foods. I don't always prefer native yeast wines to other wines by themselves, but I almost always do in the presence of food. I think it's remarkable the adaptability of the native yeast wine flavors. If you want to try a food pairing experiment, send me an email (ben@montinore.com) with your address and I'll send you a bottle of our 2012 Pinot Gris to compare against another similarly priced gris on the market. If you can, try the wines with a couple different dishes and see if you agree with me that the wine adapts well to different flavors. Like Ginger Rodgers, a good wine can follow the dance of a good a meal with grace and "backwards and in high heels." (Hmm, you're giving me an idea for a blog entry of my own...) I welcome your honest feedback, Mattie.
June 12, 2013 at 3:03 PM

Thank you for sharing your thoughts on my thoughts and offering an insightful perspective on native yeasts. Since wine is such a subjective thing, I think it shows true passion to respond to what bloggers say about your creations.

I too think that wine is art, and my definition of art is simple: You know something's art if it is defined by an individual's emotional response rather than intellectual (sort of like Nanatte's response to my post). Sure, we can talk about RS and acidity with objectivity, but a wine's expression, to use a term of Karen MacNeil's, is much less tangible. That said, I like more acidity in my white wines than those that I tried at Montinore. My readers know this. Maybe there are wines I missed? I also love how a wine's character completely changes when paired with a great dish. For that reason, I'll take your challenge—so expect an email—and I'll write a follow up post afterward.

Again, it was a real pleasure meeting you Ben, and thank you for the hospitality that you showed us at Montinore. I've enjoyed speaking with Montinore-owner Rudy Marchesi about the amazing pinot noirs coming out of the Ahr Valley, and I highly respect what you guys are doing.