Putting the Suspended Coffee Movement into perspective, now that it's about to strike Portland and Seattle straight in the crema.

Let's take a break from all the wine for just a second to talk about coffee, a great new book, and the ways in which we can all be more kind to one another. Over the last year, I worked with Smudge Publishers, an Australian publisher, on the 543-page book, Coffee Encounters. One of five contributing authors, I labored to tell the story of Australia's entire coffee industry, and the story turned out to involve everyone from specialty coffee roasters in Sydney and baristas in Melbourne to Ana Maria, a struggling coffee picker in Guatemala, and the Suspended Coffee Movement. This massive coffee-table-style book—one that's actually about coffee:-)—shares the perspectives of hundreds of people in the coffee industry, and it taught me about the Suspended Coffee Movement, a movement that shares coffee and more with those less fortunate.

If you've been watching the news, then you've likely heard about the man who bought 500 coffees at a Tim Horton's in Edmonton, Alberta, Canada, on July 22, 2013. He simply ordered a coffee and a Boston-cream doughnut and 500 additional coffees and told the cashier to give the coffees away for the rest of the day. This trend has caught on over the last week, and now over 9,500 coffees have been purchased. My questions is: Is this related to the Suspended Coffee Movement? 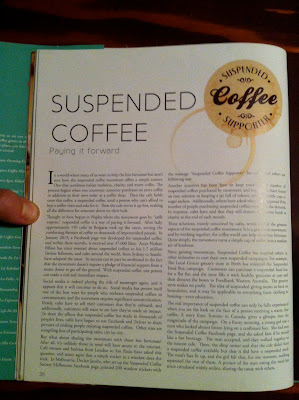 The Suspended Coffee Movement is believed to have begun in Naples, Italy, and then Bulgaria took up the cause, and it seems to be rapidly gaining speed right now. The Suspended Coffee Facebook page is less 8 months old a and it has well over 100K Likes, and I have a feeling that the mystery man in Edmonton was influenced by the movement. In buying 500 extra coffees, he, either purposefully or not, created 500 suspended coffees. 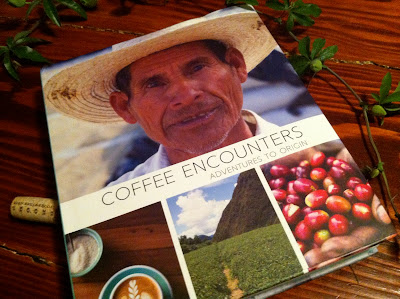 The Suspended Coffee Movement is simple: While purchasing your morning brew or afternoon pick-me-up, buy an extra coffee and the cafe will give it to a person in need. Many cafes feature Suspended Coffee stickers in their windows to let you know that they participate in the cause. That's it. A random act of kindness with a huge following. 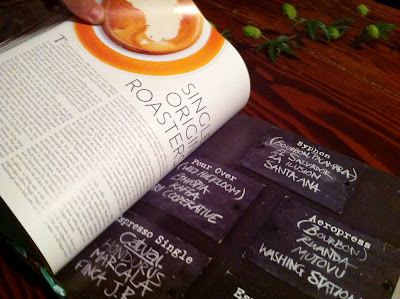 It seems that a lot of the people in the coffee industry care deeply about the world and the people in it (I can't believe I'm even writing this as though it's novel, but hey—). Maybe this is because coffee spans the world and, further, because it takes people all over the world to create the delicious cup off coffee that we enjoy each morning. Smudge Publishers has taken up the cause, too, and the Coffee Encounters book is dedicated to Ana Maria, the Guatemalan coffee picker so poignantly depicted by writer Tyson Hunter, and her children.

Additionally, Smudge Publishers started the charity, Picking Up The Pieces, which will begin with helping Ana Maria and then continue to provide running water, electricity, sewerage, gas, and more for others in similar situations. $5 from every book sale of Coffee Encounters will be given to Picking Up The Pieces, and, until you find Coffee Encounters on a book shelf near you (at the moment, it is not distributed to the United States) you can purchase a Suspended Coffee today. Good luck my friends, and be excellent to one another.