One of the first things I learned visiting the Okanagan Valley, Canada: It's hard to find a winery or restaurant without incredible views! This wine region is beyond words, from the sheer rock face of McIntyre Bluff to the placid blue surface of Lake Okanagan. My first night, I stayed at Tinhorn Creek Vineyards and ate at the onsite Miradoro Restaurant. The hospitable and welcoming folks who own and operate Tinhorn Creek showed me how to relax Okanagan-style, and this ampitheatre lay between us and the valley as the sun set:


What an honor it is to visit someone's home, dine with them, and talk about the wine they create. Tinhorn Creek makes a range of wines, and I fell for their reds, which show the fruitiness that comes with great grape maturity as well as the high acidity that comes from a colder grape-growing environment. The Okanagan Valley, which is located in the southeast corner of British Columbia and runs straight down to the border of Washington, has a range of growing environments, and, in the south, where Tinhorn is located, cabernet franc, merlot, and cabernet sauvignon vineyards excel. In general, Bordeaux grapes are widely cultivated, as well as syrah and a handful of other bold reds that benefit from having a strong acid backbone. They paired perfectly with Miradoro's Lamb, which is a braised shank served over Moroccan-spiced lentils with cilantro and sour cream. 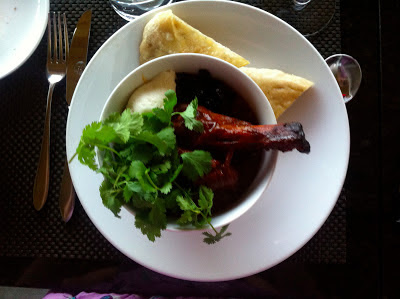 Of all the fantastic Tinhorn Creek wines I tasted, the 2010 Tinhorn Creek Oldfield Series Cabernet Franc really stuck out. I don't know about you, but a good cab franc is hard to find. Usually, they're either too jammy or too vegetal, but Tinhorn's Oldfield Series Cabernet Franc walked the line: It had the rich cherry fruit and chocolate in front followed with herbacious notes, and a killer, integrated acidity the entire way through. The acidity was so well balanced that it seemed to be waltzing with the flavors, which, my friends, is simply classy.

Unfortunately, the 2010 is sold out, but you have options. You can wait for the 2011 Oldfield Series Cabernet Franc to be released; you can try out the regular ol' 2010 Cabernet Franc, which is also solid; and you can test these other Tinhorn Creek wines, which were my personal favorites:
To go wine tasting at Tinhorn Creek Vineyard, arrive any day between 10am and 6pm (just read the sign dummy). Wine tasting is free.

Portions of this article included information obtained during a press trip funded by the Thompson Okanagan tourism board.
Email Post
Mattie John Bamman
After more than a decade as a travel writer and restaurant critic, I moved to Maine with my wife to start a homestead. I created Ravenous Farmer to inspire others to live more sustainable and fulfilling lives.