American Rieslings - A Taste of the Finger Lakes

America's primary riesling producers are Washington, Oregon, California, New York, and Michigan, and, living in Oregon, I like to keep close tabs on what's happening on the other side of the country in terms of riesling. I love Oregon's rieslings for their incredible terroir. In general, the style involves high acid levels and a incredible tartness—two components that make many Oregon riesling conducive to aging. When I open a bottle of Oregon riesling, I know it's good if it tastes like crisp Oregon air coming straight off of the Pacific Ocean.

The Finger Lakes Region of New York, located in the northeast of the state, have garnered a number of important awards. At the fore, Wine & Spirits magazine listed 20 Finger Lakes rieslings on its of best of 2012 list. As part of the Finger Lakes Alliance virtual tasting series, which you can check out on Twitter using hashtag #FLXWine, I was sent free samples of four rieslings. They were produced by Hosmer Winery, Glenora Wine Cellars, McGregor Vineyard, and Wagner Vineyards and range from dry to sweet.

2012 Hosmer Dry Riesling Cayuga Lake ($15) - Out of all of the wines, this was the crowd pleaser. I actually enjoyed the 2012 Wagner sweet riesling best, but this was my second favorite. It has peach, pear, fresh grass, and petrol on the nose and lime peel and lemon on the palate. Clean with nice minerallity, too. 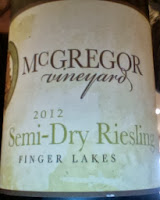 2012 McGregor Vineyard Semi-Dry Riesling ($17.99) - In general, I'm not a fan of semi-dry rieslings unless they taste of a sweet summer afternoon. This wine was made with fruit grown on 35-plus-year-old vines, but I found the flavors were not intense enough for me. The nose was floral with lots of tangerine, too, and I got honeysuckle and yeast on the palate.

2012 Glenora Wine Cellars Riesling ($?) - Again, this wine's sweetness feel toward the wishy-washy middle, and, in my opinion, the acidity level was just too low, giving the wine an overall flat quality. The nose had some interesting herbal-tea scents, though. 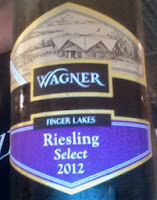 2012 Wagner Vineyards Riesling Select ($?) - This wine was my favorite because, even though it was sweet, it had a great acidic backbone that left the palate clean. Overall, the 2012 Wagner Vineyards Riesling Select had great balance—a decadent and viscous wine with enough class to serve with a savory entree course. Thai curries obviously come to mind. Savory soups involving sweet corn. This wine's creamy texture could really make for some interesting pairings chefs.
Email Post
Mattie John Bamman
After more than a decade as a travel writer and restaurant critic, I moved to Maine with my wife to start a homestead. I created Ravenous Farmer to inspire others to live more sustainable and fulfilling lives.