This article is part of The Great Northwest North American Wine Road Trip series, during which we'll visit wine countries in Oregon, British Columbia, and Washington.

As I was saying: Throughout the meal, Roger had given me a great introduction to Hester Creek Winery but we'd only talked business. That's when things got real, and we started to talk about our families. Roger, his wife, and his children all call the Okanagan home, and I told him that my father was wooden sailboat builder and that I grew up in Maine. We began discussing the new forms of publishing—blogs, Twitter, online versions of newspapers, etc.—and I felt that we'd reached a higher plain.

Soon enough, we climbed the hill and entered the modern Hester Creek Winery, replete with a six deluxe guest suites inside of a Mediterranean-style villa. The winery is the ideal base for a trip through the southern Okanagan Valley, and you can find great dining at Terrafina and live music at the winery most Saturdays. Further, Hester Creek Winery hosts cooking classes, which involve creating a four-course meal using fresh Okanagan ingredients in a beautiful kitchen.

The Hester Creek grounds and vineyards cover 95 acres, and the views from their high up perch overlooking the Golden Mile growing area are mind-bendingly beautiful. The winery takes its name from the original owners of the property, Judge Haines and his daughter Hester. Spending her whole life on the property, Hester played a major role in its development, including giving her name to a stream that runs through it. Hester Creek Winery adopted her name to honor this history, and its cabernet franc vineyard dates all the way back to 1968, making the vines some of the oldest in the region. 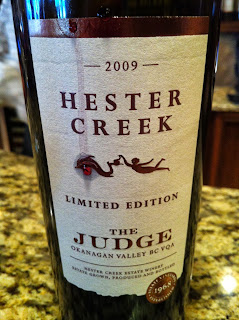 The above wine, Hester Creek Winery's 2009 "The Judge," is one of those Okanagan powerhouse reds that the area is developing a reputation for. I dare anyone who loves Napa cabernet sauvignon to sample The Judge and find it lacking. It is an estate red blend, and the blending ratio changes annually (the 2009 The Judge featured merlot, cabernet sauvignon, and cabernet franc). You can taste this wine and others seven days a week in the tasting room, which is open year round, and tastings are free. Moreover, the winery typically serves several "tasting-room-only" wines that can only be purchased direct at the winery. Other wines that stood out to my palate:


Portions of this article included information obtained during a press trip funded by the Thompson Okanagan tourism board.
Email Post
Mattie John Bamman
After more than a decade as a travel writer and restaurant critic, I moved to Maine with my wife to start a homestead. I created Ravenous Farmer to inspire others to live more sustainable and fulfilling lives.