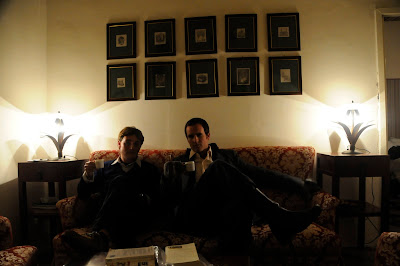 It was one of those sad days when it felt good to be sad. On Thursday, after 8 debaucherous days of rather intense wine drinking, our good friends waved good-bye and hopped aboard a nighttrain to Florence. Jael and Mandi were visiting my girlfriend Kristin and I from Hawaii. Jael is a college friend--one of those guys that you thought might be dead by now, but who, against all types of sound reason and unprejudiced logic, somehow became a lawyer. Though we only went to school together for two semesters before he went back to Hawaii and we didn't see each other again for nearly five years after that, we've somehow stayed close. When he happened to be heading through San Francisco for the Rock The Bells concert a few years back and crashed at my place, it was enough to convince me that I needed to visit him in Hawaii. 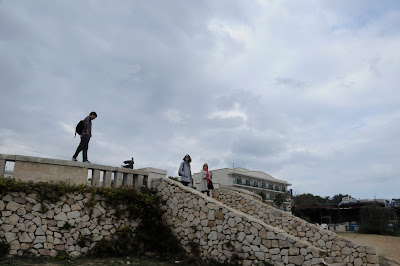 Kristin and I headed west--even further west--and spent an amazing month in jungle-bound treehouses without electricity and such. There I met Mandi for the first time and found myself happily perplexed by the beautiful, fast-talking, good-cooking Mainland girl who knew enough about wine to keep us talking until late in the night. Mandi, Jael, Kristin, and I averaged four bottles of wine a night while gorging ourselves on Mahi-Mahi and Opah with avocado-pineapple salsa and I think we signed some kind of pact to all marry each other if we weren't already married to each by the age of 35.

We repeated the luau Italian-style this time. Tons of cooking in our villa and, well, again roughly four bottles of wine a day on average. We rode bicycles through vineyards and Jael got to eat grapes from the vine for the first time. We visited Apollonio Winery, where Winemaker Massimiliano Apollonio gave us a tremendous tasting (that evening we rode 15 bottles of wine home on four bicycles). Massi took us on an intimate tour of the facilities and let us try the recently released 2004s (the winery never releases red wines younger than four years old). Later in the week we visited Sergio Botrugno at Botrugno Winery in Brindisi and drank his wines on the roof of the winery, overlooking the western side of Brindisi Bay. Sergio gave us a detailed, step-by-step tour and explanation of how he makes his wines. For me, the most interesting thing I learned was that he does not always add sulfur to stabalize his wines (a common practice completed during the pre-fermentation process in most cases, which protects the wine from turning in the bottle because of bacteria). Instead, he works at very cold temperatures to kill most of the unwanted organisms in the wine, then if, after intense testing, he discovers high levels of organisms, then he resorts to sulfur. He remarked that "it is not a matter of believing that sulfur is bad, it's that I prefer not to use it." 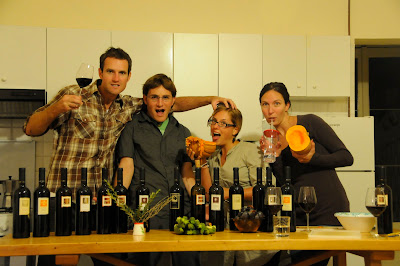 Being able to share wine with good friends is perhaps the best capability of wine. That Mandi and Jael love a good red as much as Kristin and I resulted in multiple 3-5 hour dinners where we mixed conversation about the marrow of life with your-momma jokes (and worse: your grandmomma jokes). That they love a good bottle of Prosecco even more than Kristin and I--though we do love Prosecco--resulted in perfect pairings with buttery mussels and mozzerella balls stuffed with ricotta. 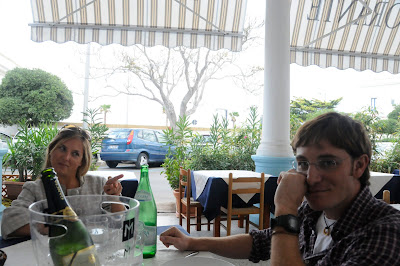 Strange how thankful these times make me feel. Cheers to your own times... Your own bottles of wine and your own all-night luaus.
Email Post
Mattie John Bamman
After more than a decade as a travel writer and restaurant critic, I moved to Maine with my wife to start a homestead. I created Ravenous Farmer to inspire others to live more sustainable and fulfilling lives.

j. eli said…
Bud, you make me sound like a drug addict, but that's okay, because you made me laugh my ass off. We had an incredible time, thanks to all the wine you showed us and the food you cooked for us. Here's to setting up camp in Mesagna. I declare this clean reporting.
November 11, 2009 at 7:45 PM

little mak said…
this is good, mattie. thanks for being better at documenting than my brother was. sounds like a lot of fun and i can't believe you are getting paid to live in italy and blog about wine! living the dream.
November 12, 2009 at 1:27 PM

Mattie John Bamman said…
Yo Little Mak, good to hear from you! Your bro (Big Mak) rocked it like a true Italian, and it was killer to see him. Hope you're having a good time wherever you are these days. Late---Mattie
November 13, 2009 at 8:09 AM