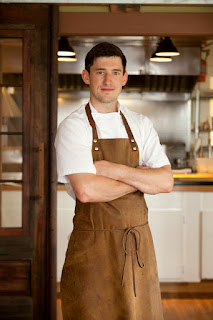 Chef Blaine Wetzel landed the 2015 James Beard Award for Best Chef: Northwest, marking yet another milestone in his culinary career. Previously, he tied for the James Beard Foundation Rising Star Chef category. With his rising success, awards will continue to come, that is certain.


A Washington state native, Wetzel has worked in kitchens since his early teens, and he is considered a prodigy of René Redzepi, head chef of Nomo, the two-Michelin-star restaurant in Denmark. After responding to a Craigslist ad about a chef’s opening at Willow’s Inn, he was offered the position in 2010, and the potential of working with indigenous foods paired with the breathtaking Lummi Island location pulled Blaine in. Just one year later, the Inn earned a spot on The New York Times list as one of the world’s 10 Best Restaurants worth traveling to. Chef Wetzel describes the menu in his own words as “a moment in time, fished, foraged and farmed, a story about the land and the place is the food.”

1. How do you describe Northwest cuisine?
I would say that what is considered the Pacific Northwest is a really large area with a ton of geographic diversity, probably about the same size as France. Similar to France, there are different cuisines within our own different regions that correspond to ingredient availability and cultural factors. I live in the northern Puget Sound, and I would say that, in this area, our cuisine is rooted in the abundant fish and shellfish. This ties into our history as a fishing area, along with fertile agricultural lands with long cool weather growing seasons.

2. Who are six of your favorite purveyors, whether farms and ranches or hot-sauce, salt, or olive-oil producers?
Loganita Farm (our farm)
Lummi Island Biodynamic Farm— It produces the most unique versions of vegetables that I have ever seen.
Taylor Shellfish— They grow a lot of different shellfish in many locations in the Sound.
Jones Family Farms— Awesome family providing all sorts of top shelf stuff on Lopez Island.
Skagit Valley Ranch— Animals raised right.
The Bread Lab— Bread done right.

3. When you go out for a nice meal, what are two or three of your favorite spots?
see below

4. Who are two other Northwest chefs that you admire?
Matt Dillon— Fantastic cook. I really enjoy all of his restaurants.
Nathan Lockwood— Nice guy and really good cook.
Canlis Bar— Best cocktails, with views and music.

5. In your opinion, is there an area of Northwest cooking that doesn't receive enough attention?
Not really. I enjoy the amount of attention that the PNW is getting these days. There are several great publications putting out good stories and information. Also, in the past few years, there has been a decent amount of national and international attention given to the great ingredients and environment we have here.

6. Looking toward the future, what about Northwest cuisine most excites you?
I am excited about high quality local grains, fresh wild game and all the amazing craft beers that are happening. In the kitchen, every night I am excited for dinner. I do this because I love seeing people enjoy the tastes we create while they soak in the views and comfortable setting here on Lummi Island.


http://www.willows-inn.com/lummi-island-dining.htm
Email Post
Mattie John Bamman
After more than a decade as a travel writer and restaurant critic, I moved to Maine with my wife to start a homestead. I created Ravenous Farmer to inspire others to live more sustainable and fulfilling lives.