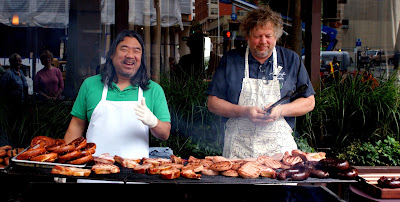 Creating fun concepts that can both stand alone and fit within a group is an art, and doing so quickly and efficiently while keeping everything steady is Chef Tanaka’s expertise. He is a major contributor to the success that has been Tom Douglas restaurants since he began working for the company in 1997. This has led to the opening of his own restaurant, TanakaSan, within the Tom Douglas family, in 2013.

Located inside of Belltown’s Assembly Hall, TanakaSan is described by Tanaka as an American Asian restaurant. The concept is both high-energy and casual. Sit at the counter and watch the action while enjoying the delicious and eclectic menu, which is greatly inspired by the food that Tanaka grew up on as a Japanese-American in Los Angeles, CA.

1. How do you describe Northwest cuisine?
Historically, I don’t find that there is a Northwest cuisine, but more an ethos. That ethos, centered on the amazing seafood, foraged jewels and small ranched or farmed products, results in a diversity of personally tinged cuisine. So to me, the Northwest ethos is about telling your personal chef story through the regional goods of the Northwest. The Northwest cuisine ethos isn’t hampered by a strict set of rules or ideas that need to be followed in order to be considered “Northwest Cuisine”.

Modern French food had an identity crisis and cuisine evolved. The French, mired in tradition, fell by the way side in regards to what was cool, hot and interesting. This identity crisis has led to a non-traditional bistro movement and has re-invigorated the idea of what is French cuisine. Northwest cuisine, which to me hasn’t had an identity, is growing and evolving into itself as we speak.

2. Who are six of your favorite purveyors, whether farms and ranches or hot-sauce, salt, or olive-oil producers?
Prosser Farm— Our farm, in its eighth season, produced around 55,000 pounds of produce for our restaurants.
Big Barn Farm— Located in Sequim, they produce unique Andean root crops.
Jacobsen Sea Salt— A wonderful Oregon salt company.
Bonache hot sauce— A tiny hot sauce maker in Ballard.
Appel Farms— They're a small cheese maker, and I love their paneer.
Big Gin— A Ballard micro-distiller bringing big flavor to the gin world.

3. When you go out for a nice meal, what are two or three of your favorite spots?
My favorites for a nice meal are Brimmer and Heeltap in Ballard and Monsoon in Capital Hill.

4. Who are two other Northwest chefs that you admire?
Two chefs that I admire are Bruce Naftaly and Melissa Nyfeler. They both had highly curated visions for their restaurants, and they stuck to it.

5. In your opinion, is there an area of Northwest cooking that doesn't receive enough attention?
I personally feel that The Pacific Northwest gets a lot of media coverage.  We’re no New York by any means, but for the size that we are, we get a ton.

6. Looking toward the future, what about Northwest cuisine most excites you?
What excites me most is the diversity and plethora of restaurants in the city. First and foremost, I love to eat, and there are more options than ever as a diner.  Whether you go downtown or in a neighborhood, there’s going to be a joint that fits your fancy. As far as what I’m most excited about, it’s cooking with my son, who’s taking an interest. We’ll smoke some ribs and make ramen for the Super Bowl. My son will make the dashi, and we’ll team up to make the broth.


http://tanakasanseattle.com/
Email Post
Mattie John Bamman
After more than a decade as a travel writer and restaurant critic, I moved to Maine with my wife to start a homestead. I created Ravenous Farmer to inspire others to live more sustainable and fulfilling lives.