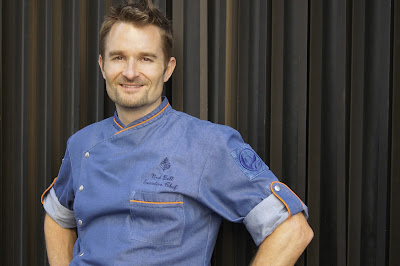 At the tender age of twelve, Ned Bell started cooking at home for his siblings, thus sparking an enthusiasm for preparing fresh, local food. By age fifteen, he landed a job as a dishwasher at Kerrisdale’s Avenue Grill, and he went on to attend Dubrulle Culinary School. After school, he began apprenticing at Vancouver restaurants, and today, he is executive chef of YEW Seafood + Bar at the Four Seasons Hotel in Vancouver.

As executive chef, Bell is committed to sustainable seafood, and this commitment can be seen throughout YEW’s concept and menu, as well as his Chefs for Oceans (INSERT:http://chefsforoceans.com/)organization and development of Canada's National Sustainable Seafood Day. While many of his creations are inspired by various global cuisines, Chef Bell prides himself on using only the best homegrown ingredients. It is this vision that has put Bell in the spotlight as an innovative yet sustainable culinary artist.

1. How do you describe Northwest cuisine?
I describe Northwest, or West Coast Cuisine, in many ways. But most simply, it’s globally inspired, and locally created. We have flavors from all over the world, put together with ingredients from the lakes, oceans, rivers, farms, orchards, pastures and farmlands that we call home.

3. When you go out for a nice meal, what are two or three of your favorite spots?
Grand Dynasty for Dim Sum
Via Teverre for Pizza
Zest for authentic Japanese
Bella Gelateria, for the best Gelato in the world

4. Who are two other Northwest chefs that you admire?
I admire my collective of culinary visionaries who push hard to define and redefine daily. Feeding people matters, and what and how we feed people matters. We are not solving the world’s problems, but how we feed each other will define the next generations.

5. In your opinion, is there an area of Northwest cooking that doesn't receive enough attention?
We need to highlight the incredible work that our fishermen's and women do. Without them our cooking wouldn’t be as world class as it is. Sustainable seafood from the Pacific coast is some of the best in the entire world and the hard working people that nurture their craft need more love and attention.

6. Looking toward the future, what about Northwest cuisine most excites you?
Through our foundation, Chefs for Oceans we look forward to continue to nurture the message of sustainable seafood through education, awareness of wild well managed fisheries and healthy best practice aquacultures.


604.692.4939 (4YEW)
The Four Seasons Hotel Vancouver
http://www.yewseafood.com/
Email Post
Mattie John Bamman
After more than a decade as a travel writer and restaurant critic, I moved to Maine with my wife to start a homestead. I created Ravenous Farmer to inspire others to live more sustainable and fulfilling lives.