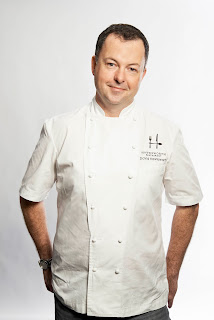 Chef Hawksworth's culinary background includes stints in some of Europe's best restaurants. These include the European Michelin-starred kitchens in Le Manoir aux Quat’ Saisons, L’Escargot and The Square. Recognized by Western Living’s “Top 40 under 40,” Hawsworth was the youngest chef to be inducted into BC’s Restaurant Hall of Fame. In addition, he is the recipient of the 2012 and 2013 Vancouver Magazine Restaurant Awards for Restaurant of the Year and Chef of the Year.

1. How do you describe Northwest cuisine?
For us here in Vancouver, Pacific Northwest cuisine generally means Asian influences, including the emphasis of light, acidic and addictive flavors. Plus there is the inclusion of an abundance of sustainable seafood on everyone’s plates and fresh local produce.

2. Who are 6 of your favorite purveyors, whether farms and ranches or hot-sauce, salt, or olive-oil producers?
Two Rivers Meats for coppa and duck
Mikuni Wild Harvest for wild mushrooms
Organic Ocean for spot prawns and salmon
Kuterra for the best inland farmed BC salmon
North Arm Farms for vegetables

3. When you go out for a nice meal, what are two or three of your favorite spots?
My favorites would be La Quercia, on Vancouver’s Westside, for Italian. A definite classic would be Vij’s on 12th Avenue for his spin on Indian food. I’m also an avid skier and try to spend lots of time on Whistler Blackcomb during the winter, so Sachi Sushi is the go to place up there.

4. Who are two other Northwest chefs that you admire?
In Vancouver, there are a couple of standout chefs, Lee Cooper and his team has been doing a great job at L’Abattoir, since it opened in 2010. A role model for me has always been Michel Jacob of Le Crocodile, for his longevity and consistency in the fine dining industry.

5. In your opinion, is there an area of Northwest cooking that doesn't receive enough attention?
Not necessarily. In the past few years we’ve noticed the public paying more attention, in a positive way, to many different areas of Pacific Northwest cuisine, including sustainable seafood, responsible cultivation of beef, and most recently, a strong emphasis on vegetables taking the leading role on restaurant plates.

6. Looking toward the future, what about Northwest cuisine most excites you?
What always excites me is the freshness and accessibility of Vancouver’s waters—things like spot prawns, Dungeness crab and oysters that are sitting on our doorstep. We are working on a new restaurant opening later this year, and I am hoping to create a new style of menu for Vancouver and the Pacific Northwest region. More details to come!


https://hawksworthrestaurant.com/
Email Post
Mattie John Bamman
After more than a decade as a travel writer and restaurant critic, I moved to Maine with my wife to start a homestead. I created Ravenous Farmer to inspire others to live more sustainable and fulfilling lives.