More Than A Mouthful - Breasts and Champagne 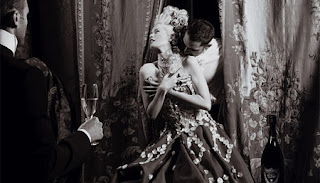 I do not like things that are pretentious. And I do not like lame art. But something made boobs and champagne go together, and if it takes the clout of Dom Pérignon to bring it to the people, then so be it.

It comes in the form of a so-called artwork by Karl Lagerfeld, the world famous fashion designer. Lagerfeld was called upon to complete an advertising parade for Dom Pérignon that took the world by storm in 2008. Unless you don't read magazines, you've likely seen images like the one above during the last year. The woman is Claudia Schiffer, and her breast can now be used to drink from.

Lagerfeld molded a porcelain drinking glass using the outline of one of Schiffer's breasts. The drinking glass is supported by three, miniature porcelain replicas of Dom Pérignon. The idea of using the shape of a boob to create a bowl for drinking champagne came to Lagerfeld because Queen Marie Antoinette supposedly had a bowl designed after her own, in 1787.

The drinking glass comes when you buy a bottle of 1995 Dom Pérignon Oenothèque, which runs a cool $3,150. While the champagne might be worth it, the artwork is decidedly not. 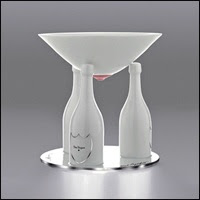 (the photographs in this post are not my own, viz. not my property)
Email Post
Mattie John Bamman
After more than a decade as a travel writer and restaurant critic, I moved to Maine with my wife to start a homestead. I created Ravenous Farmer to inspire others to live more sustainable and fulfilling lives.