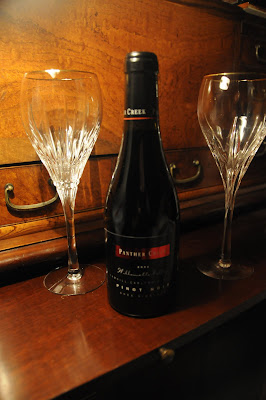 Panther Creek Cellars has been making great Pinot Noir since 1986, and even with a total production of 50,000 cases a year, it maintains an ultra-premium quality level. I first experienced Panther Creek's Shea Vineyard Pinot Noir in 2006, while working at Eos Wine Bar in San Francisco's Cole Valley, and I remember being taken aback by its truly silky texture. It taught me that you can actually chew some wines.

Continuing with Karen MacNeil's systematic approach to wine tasting that I outlined in my last post, the 2006 Shea Vineyard Pinot Noir was a wine with enough character to take the starring roll in the next James Bond. Seriously, if this wine walked into a bar, you'd want to hang out with it. It was so beefy that it seemed a bit larger than medium bodied, but a lot of that had to do with how many components there were in each sip. I have never tasted a wine that so perfectly captures the taste of young plums.

Let's begin with the first element of MacNeil's approach: A wine should taste like the grape used to make it. It is a common misconception that Pinot Noir wines are all light bodied, and this wine certainly was not. I cannot say that it tasted like a traditional Pinot Noir, though. I think Oregon in general likes to make their wines loud, and while this wine fit my personal preference, its loudness did not accentuate the characteristics of the Pinot Noir grape. Yes, that means Varietal Fail.

As for integration, I think the components of this wine were well balanced, and the silky mouthfeel contributed to this.

The expressiveness of this wine was clear: Oregon doesn't care about your grandfather's grandfather's way of making Pinot Noir. Oregon has its own style, and this wine perfectly captures that image in focus.

And that brings us to connectedness, or the wine's ability to taste like the area it grew in. Oregon Pinot Noirs certainly have their own characters; the Willamette Valley in particular is known for erratic yet disciplined weather, viz. very cold nights followed by very warm days, and this puts a good amount of stress on the fruit, forcing it to fully mature while maintaining high levels of acidity. Did the Shea Vineyard represent this? You bet. The fruit was mature, the wine was medium bodied, as are many Oregon Pinots, and the cold night acidity made for great tannins on the finish.

The final element of MacNeil's approach, complexity, was hard to judge. Did it have a bit of the je ne sais quoi? An interesting and enticing unknowable quality that repeatedly had me going back for another sip? I'm gonna have to say, I don't think so. While this wine had a lot going on, I think I could pinpoint most of its qualities. MacNeil's definition for complexity is very unique, and I can elaborate on it if anyone wants to know about it. Just comment or send me an email. So again, Complexity Fail.

Some facts: The Shea Vineyard Pinot Noir is the most popular wine at Panther Creek, and this year, 2,176 cases were produced. When tasting at the winery a few weeks ago, I thought that the 2006 Freedom Hill was a similarly fine wine taken in another direction, and that the 2006 20th Anniversary Pinot Noir, which is composed of around 50% Shea Vineyard grapes, was the best Pinot Noir I tasted that day. 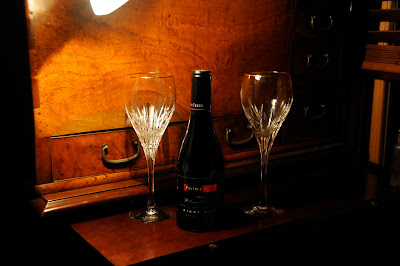 Tasting at the winery is a unique experience because the winery is located inside the old power plant of McMinnville, Oregon. Instead of windows looking out on rows of vines, our view included exposed heating ducts and brick walls. 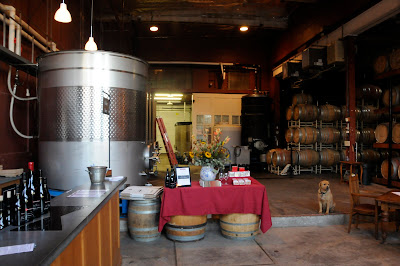 A bottle of 2006 Shea Vineyard Pinot Noir is $43, and a half bottle costs $20 (you do the math). Tastings at Panther Creek cost $5 each, and this fee is put toward purchases.
Email Post
Mattie John Bamman
After more than a decade as a travel writer and restaurant critic, I moved to Maine with my wife to start a homestead. I created Ravenous Farmer to inspire others to live more sustainable and fulfilling lives.

Ryan Fish said…
Thanks for the fair review, Mattie!

You took some excellent pictures, too. What kind of food did you pair with this wine?

Mattie John Bamman said…
Ryan - thank you for commenting and the kind words. You guys do great work (and of course you know that). Sadly, I can't remember what we paired with the Shea. I know I'd give my left kidney for a bottle of your Pinot over here in Italy -- tough to find. Best---Mattie
August 28, 2009 at 9:24 AM