How The Swiss Do Fondue 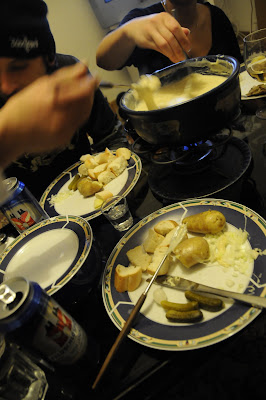 Visiting with friends in Zurich, Switzerland, Kristin and I learned all about the financial crash of the Swiss banks (which is too bad, since I was considering writing a How-to article on opening a Swiss bank account) and some of the specifics about the cheesy wonder, fondue. As our friend pulled out a giant clay fondue pot, I discovered that we'd be dipping much more than bread. Of course, you can dip anything you like in fondue, but I'd never thought of potato for some reason. Then there's the dipping of the bread into tiny glasses of Kirsch - a fruit brandy - soaking them with the powerful flavor of booze before you dip them into the cheese. Tiny pickled onions were also dipped and also delicious. My favorite idea however, was the diced onion that you rolled your cheese covered potato in as a last step before popping it into your mouth. To accompany the fondue, tiny Gherkins were also served.

It turns out that the crusty patch of cheese left at the very bottom of the pot - where the flame most directly hits - is the best part, and our hosts gave it to Kristin and I to split. Imagine the crunchy cheese that spilled over the sides of a grill cheese and slightly burned on the pan. Now multiply it by infinity. 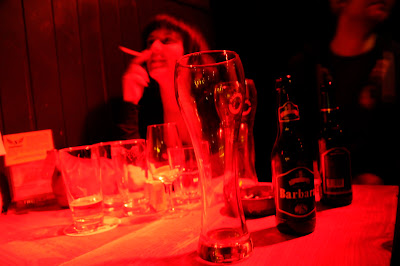 While most of the party had white wine with the meal, I opted for some good Swiss beer instead. They even have one named after my Mom. Clean and refreshing, it almost had me yodeling. As it should have, in a country that has a minimum wage of around 18 dollars and six packs that cost nearly as much. Switzerland is a country of impressive wealth, but with the banks going into financial shock and the Swiss government's refusal to join the European Union, I wonder what will become of the land of self-reliance, good cheese, and Schnitzel "Switzerland"? 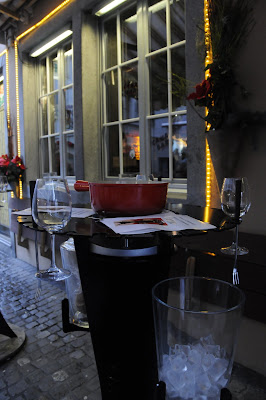 Check out these handy outdoor tables designed specifically for wine drinking. The edges of the tables are composed of slots to hold your wine glass and a bucket of ice is built into the side, and what's that... a fondue pot in the middle (click for more detail)?
Email Post
Mattie John Bamman
After more than a decade as a travel writer and restaurant critic, I moved to Maine with my wife to start a homestead. I created Ravenous Farmer to inspire others to live more sustainable and fulfilling lives.

Live at Choice said…
Hey there Mattie. Loved your post about the REAL FONDUE! :)

I am linking to it from my new blog, www.fonduejunkies.com. Come and check out my blog. I am just getting started....