Each city and town in Italy has it’s traditional foods, in part because Italy as we know it has only existed for 200 years. Before that, Italy was composed of several individual city states who had no intention of uniting; neither in policy or in pasta. As Elizabeth Gilbert reminds us in her book Eat, Pray, Love, it wasn’t until the 16th century that the Italian language was unified, Italian linguists using Dante’s Divine Comedy as a basis. 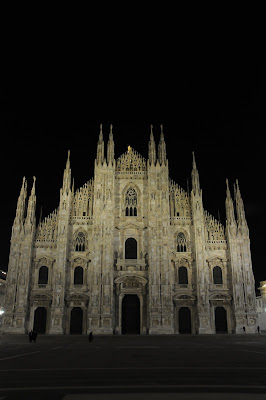 Milan, located in Lombardy, is surrounded by amazing wine country. Some of the main grapes in the area are Nebbiolo (used in Barbaresco, Barolo, and Brunello), Barbera, Dolcetto, Arneis, and Muscat Blanc a Petits Grains. The region is known for well-aged reds, spumante, and the incredible Moscato d’Asti dessert wine.

But, having just returned to Italy, I wanted to indulge in a particular wine: vino della casa. Each restaurant has its own, which can be any number of pleasant surprises. In Milan, it is usually Barbera, Dolcetto, or one of the delicious sparkling reds of the Oltrepo region. Served in quarter, half, and whole liters, a full liter usually coasts around 8 euro and is both a deal and a great way to taste rustic, young wines. But, perhaps it’s the novelty too... 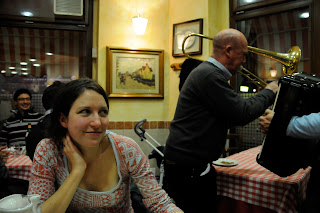 There's another side of vino della casa: You never know what you are being served. And unfortunately, it is a well substantiated fact that some Italian restaurants have been caught putting a different wine into your glass than the one that you ordered. Yes, believe it or not, some wine bars refill fine wine bottles with less-than-fine wine. With vino della casa, there's even less regulation. But as of today, I've found that most of the vino della casa fits my standards for a table wine, and for the price, I have yet to find a good reason to complain.

Milan's traditional foods are Risotto alla Milanese and Cotoletta alla Milanese . The former is a saffron infused risotto and the second is a cut of veal that is then pounded very thin, so that it's incredibly tender, then breaded and pan fried bone-in. I tried two Risotto alla Milanese and found that both lacked a powerful presence of saffron. Really, saffron is an herb that eludes me; I do not have a clear concept of its flavor. Do you have a good description of saffron that you'd like to share?

If you'd like to hear more about Risotto alla Milanese, Chiara Assi, a writer for Naples Daily News, recently wrote a great article that you can read here.

Now that I’m finished updating Milan for a travel guide, I’m off to Genoa, the birthplace of pesto, in search of a few basil-scented secrets.
Email Post
Mattie John Bamman
After more than a decade as a travel writer and restaurant critic, I moved to Maine with my wife to start a homestead. I created Ravenous Farmer to inspire others to live more sustainable and fulfilling lives.