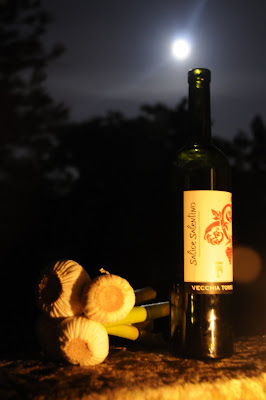 In this post I will discuss the uniqueness of Pugliese wines; what makes them different than any other wines in the world; what characteristics are a result of the environment of the Salento peninsula; everything else that terroir implies. This concept is absolutely massive so I will begin with a joke.

Have you heard the one about the American who visits a small Italian village on the coast? She rents a boat for a day captained by an older Italian man, and at one point asks:
“What is an average day like for you?”
“Allora,” he begins, “I wake up, have my espressini and pasticiotto, then take my boat out to sea for the day. Afterward, I come home, eat dinner, make love to my wife, then go to sleep.”
The American ponders for a moment then says:
“Have you ever thought of buying another boat to expand your business. There is a potential market.”
“What would it do for me,” he asks.
“Well, if you bought another boat you would double your income.”
“Ok, and then what?”
“Then you could buy another boat and even hire a few people to captain them for you, and you wouldn’t even need to work on them any more. You could move to the city, say Rome, and buy an apartment, and run your fleet from there.”
“And then what?”
“Well, you could then have someone else take over for you and then you could retire to a small village by the sea...”

The terroir of wines from the Waremme region in Belgium have been introduced by remarking that Beethoven was born in Waremme, so why can’t a joke reveal as much? Terroir is an artistic discussion of the relationship between different countries, regions, and environments all over the world conducted through wine. The Salento life - the philosophy, the tradition, the jokes, the foods - has created an easily discernable terroir.

I think the native grape Negroamaro, in both reds and rosatti, viz. rosès, is the best place to begin tasting the region’s terroir. The grape has a history of over 4,000 years in Puglia and, as I argue in an article for i-Italy magazine, it has a close relationship with the farmers who have populated Puglia for centuries.

Negroamaro is capable of being very soft in texture, deeply structured, rich and sometimes bitter, it has great aging potential, and I doubt if any other region of the world would have the environmental qualities necessary for making this troublesome grape yield great wines. That’s probably why I have not heard of winemakers in any other area of the world growing Negroamaro. Often mistranslated as “bitterest of the bitter,” Negroamaro actually combines Greek and Latin roots to mean “black, black,” meaning the blackest of the black. It has a thick dark skin that shelters the inside of the grape from the intense, heavy sun and rot.

When talking about reds made with Negroamaro, the wines are incredibly juicy, sometimes sweet, and the sun-baked skins impart a wonderful leatheriness that comes out in bottles five or more years old. I think that the new methods of heavily oaking these wines is creating a flavor of vanilla that clashes with the already jammy character. For an example of the characteristics of a specific wine made with Negroamaro, read my review of Taurino's Notarpanaro here.

The rosatti are truly unique in the world of rosè because of an intense structure. The world market for rosès is small and I think Puglia’s rosatti are the type of wine that could change this. With a backbone and a depth, the acidity cuts cleanly through a hot day, cleanses the palate when paired with even complex dishes (in a way that many white wines cannot in my opinion), and the winemakers do not have sympathy for sweetness. These dry rosès are anything but one dimensional, with aromas of wild flowers and sometimes smoke. The best rosatti that I have tried, Leone de Castris’s 65th Anniversary Five Roses, is available in the United States, but you'll have a hard time going wrong with any rosatto from Salento.

In my next post I will explain why it is blasphemy to refer to Primitivo as “being the same as Zinfandel." You guessed it, it's all about the terroir.
Email Post
Mattie John Bamman
After more than a decade as a travel writer and restaurant critic, I moved to Maine with my wife to start a homestead. I created Ravenous Farmer to inspire others to live more sustainable and fulfilling lives.