At the Apulia Wine Convention in Lecce, Italy, which I wrote about here, I tasted Taurino Winery's Patrigione, a red wine made from the Negroamaro grape. Full of rich, leathery, locked inside a dark room on a sunny day brooding over Nietzsche integrity, it was one of my favorite wines at the event. I picked up another of Taurino's wines last night, called Notarpanaro, to see how it compared.

First off, I'd like to have you consider what is likely the most important aspect of wine for you, the characteristics you find most appealing in a wine. If you could design your ideal wine, what would it be? Feel free to share you Frankenwine in the comments section.

So what's my ideal wine for sipping on a balcony soaked in the evening's light while watching the swallows dip and dive their way through the orange-pink light? Well, it might be something like Notarpanaro. I like structure, dark fruit, and a long finish combined with the unique juiciness I've discovered thanks to the Negroamaro grape and the methods of winemaking found in Puglia. There's a good reason why Taurino was one of the first Pugliese wineries to hit the United States market.

Taurino makes their Notarpanaro using the same grapes as their Patrigione, only the Notarpanaro uses 15% Malvasia Nera and 85% Negroamaro while Patrigione uses 10% Malvasia Nera to 90% Negroamaro. Malvasia Nera is a very rich and dark grape variety commonly found in the Puglia region and most regularly used for blending (however, I've been impressed with the unblended Malvasia Nera wines I've tasted). Negroamaro is the region's most popular grape, and it dates back over 4,000 years. In the best wines made from the grape the wine is very dark, sometimes bitter, but infused with an approachable juiciness. The Notarpanaro, which should be decanted or allowed to breath for at least half an hour, had a nice cedar woodiness to it, an intense satin mouthfeel, a high note of bright choke cherry, and a full, rich body. What else could I ask for on a beautiful spring evening? Hope this post finds you well. Have a drink for me. (click the image below to see the swallows that grace the Puglian skies every evening) 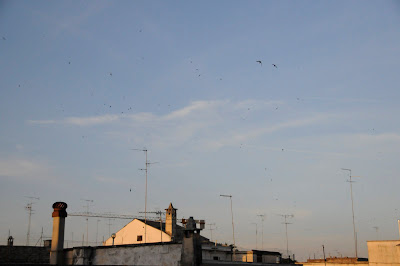 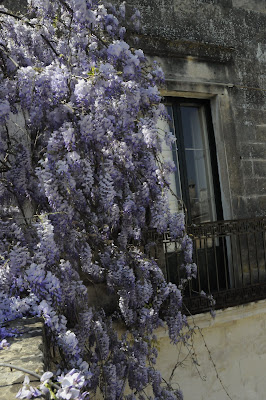 Here's a bit about where the name Notarpanaro comes from as stated on the winery's web site:

The Taurino family have always been wine - growers and the heart of their farm is the estate "Notarpanaro" which in the last century was known as "Notare Panaro". In a legal deed dated November 22th, 1817 which concerned a change in tithes, one can read: "...the land Notare Panaro, part of the territory of Mesagne, is governed according to the tithe system. The tithe must be paid to the Most Exellent Family Mugnozza, and in their name Mrs. di Virgiliis changes the income of the foresaid one hundred and eighty - four and a half "tomoli", into a monetary rent, just as prescribed in the royal decrees of June 20 th, 1808 and January 17th,1810 Mr. Longo was offered, in the name of the foresaid, thirty silverducats a year, to be paid on July 15th every year.For the landowners this rent is to be free from any deductions or levies already decreed or still to be decreed by the Sovereign..."
Email Post
Mattie John Bamman
After more than a decade as a travel writer and restaurant critic, I moved to Maine with my wife to start a homestead. I created Ravenous Farmer to inspire others to live more sustainable and fulfilling lives.

Rowena said…
Thanks for sharing your tasting notes on this one. I just picked up a bottle at Esselunga for 9.99 in recognition of today's date, and wanted to link to some english descriptions in my post. Great blog!
September 9, 2009 at 12:30 PM

Unknown said…
I just wanted to contribute...I've been a Notarpanaro fan for about 12+ years. About 2 years ago, I went to a local Total Wine and bought their last 2 bottles. I still have them and I'm waiting on the right moment. Apparently they've stopped carrying it or it's been discontinued. Any suggestions on where to find another bottle?
November 11, 2009 at 8:16 PM

As far as I know Taurino Winery is still making the Notarpanaro (check their product page: http://www.taurinovini.it/Inglese/gbv2.htm).

The vintages available here in Puglia are 2003 and 2004. I've heard that finding reliable distributors has been a constant problem for wineries in Puglia--perhaps that is keeping the wine from reaching your area? Where are located by the way?