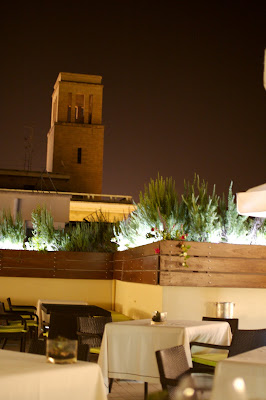 Rooftop dining at its finest, the Roof Garden Altavilla restaurant, located on top of Lecce's only 5 star resort, Risorgimento Resort, affords views of the Duomo's 210 foot tower and has an artful atmosphere of white table clothes, table-size ice buckets, and very pretty plants. An open kitchen with impeccably dressed chefs elaborates on the point. Andrew, Kristin, and I dined there a few days ago and found the elevated experience quite out of the norm of most traditional, Lecce-style dining.

The presentation of the food was some of the best I've seen, and the service was also top notch (I'm writing a review that will be featured in EuropeUpClose travel guide, so keep your eyes peeled for more information). And the wine list was great. The menu was impressive both for its international and local listings. Also impressive were the extensive list of wines between 15-30 euro, mostly from Puglia.

We ordered two bottles. First Azienda Monaci Winery's 2001 "Simpotica" (85% Negroamaro, 15% Montepulciano) and the second was L'Astore Masseria's 2007 "Filimei" (a blend of Negroamaro, Merlot, and Primitivo), but the decision was tough: there were so many good bottles on the list for good prices. For example, Tormaresca Winery's "Bocca di Lupo" was offered for $30. Liberrima, the well-known book and wine store located in Lecce's center, sells the same wine for 28.95 on the shelf. The Roof Garden knows competitive pricing. 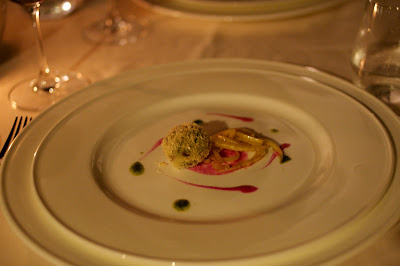 The first and only slip up at the restaurant came quickly. The Simpotica was listed as 2003 on the menu, but the 2001 arrived. I figured I'd take my chances and the wine turned out great, only next time I'll request it decanted. The first glass was obviously a bit flat and chalkiness covered any depth of flavor. But, by the second glass we were all impressed with this moody, full-bodied wine. It paired well all of the pastas dishes, and even the shrimp Carpaccio with a sea urchin sauce. The Simpatico was very gentle after 8 years. 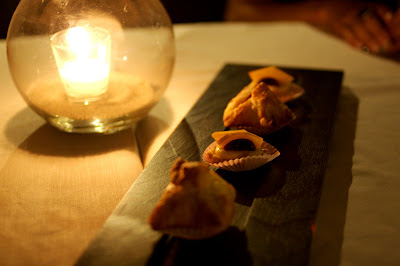 (Above photo by Andrew Wooster) I was already familiar with the Filimei, and thought it would be a good choice since we needed to fill our empty glasses quickly with assuredly good wine. The 2007 is bright, medium-bodied, and light with a nice roundness. A good wine for afternoon barbecues or gazpacho.

I recommend the Roof Garden Altavilla restaurant to anyone looking to experience traditional Pugliese cuisine turned into fine-dining. The prices are very reasonable across the board and the views, service, and atmosphere are all impeccable.
Email Post
Mattie John Bamman
After more than a decade as a travel writer and restaurant critic, I moved to Maine with my wife to start a homestead. I created Ravenous Farmer to inspire others to live more sustainable and fulfilling lives.