Calice di Stelle is a annual wine event that takes place throughout all of Italy. I'd been excited to attend the one in Lecce since May, however, Calici di Stelle in Lecce was disappointing, primarily because few wineries featured their full line of wines, but also because it was a drunken zoo--in a bad way. 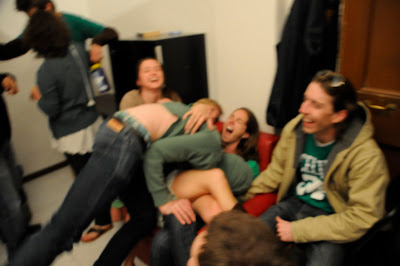 The one good thing was Cefalicchio Winery's 2005 "Romanico" (100% Nero di Troia). Wow, what a wine. Nero di Troia is one of the most important grapes in the north of Puglia; full bodied, very dark, and full of powerful tannins. Wines made with Nero di Troia often have significant aging potential. This 2005 was surprisingly soft and ready to drink at a young age, but could spend another 2-4 years in the bottle too. Very juicy dark fruit and a chewy mouthfeel, Romanico pairs particularly well with meat from the grill.

I'm not sure what went wrong at Lecce's Calici di Stelle. Perhaps it was that the event tried to show off Puglia's 26 DOC regions. DOC is a government classification that ensures that wines with the DOC seal are made using grapes sourced from a particular region and by specific methods as outlined by the Italian government. DOC wines are nothing to shout about however, and most Italians I speak with believe that IGT wines are generally better than DOC. However, speaking this way is to deal in stereotypes. In short, some DOC wines are great, some are not. 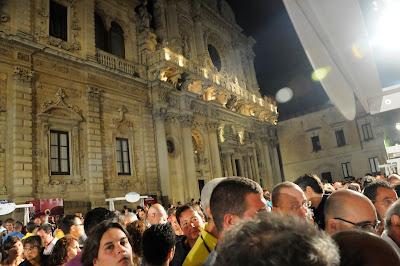 But to again speak en mass: Few of the DOC wines featured at Lecce's Calici di Stelle were interesting. Further, the event did not warrant the 10 euro price tag. The lines were absolutely abhorrent. The atmosphere was not one of contemplation and sensual stimulation. Instead, attendees had to focus on just getting wine in their glass; there was no time for tasting it, discovering what grapes were used, or hearing about the winery. I thought the signs that featured the wineries' names drove the point home: "Calici di Stelle" was printed in massive letters while the names of the wineries themselves were too small to read. So, in general, it was a poorly orchestrated zoo. I do not recommend that anyone attend this event next year in Lecce.

So that's my bitter report for today. Back to shade to recoup my superpowers. 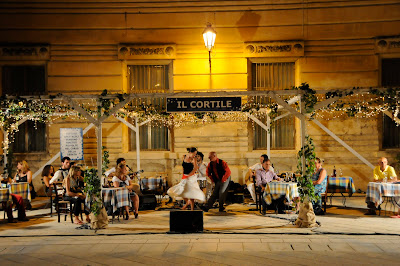