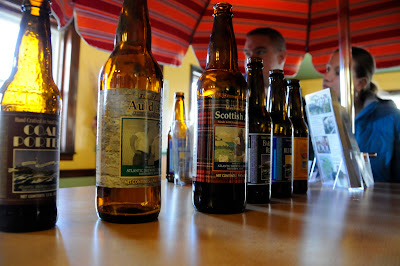 Sometimes American-style ales abuse our love for full-flavor and that many come out tasting alike. Atlantic Brewing Company, however, reminds drinkers just how varied beer can be in flavor, body, and style. The brewery offered a tasting two days ago at The Maine Grind coffee shop in Ellsworth that showcased eight of their beers. Outside, a gentleman was carving an ice sculpture of a frigate, upstairs a chili contest was taking place, and two bands were playing when I stepped beneath a beach umbrella and asked for my first taste of Island Ginger, a wheat beer spiced with ginger root. While I wouldn't drink it with dinner, it sure contrasted the cold outside. 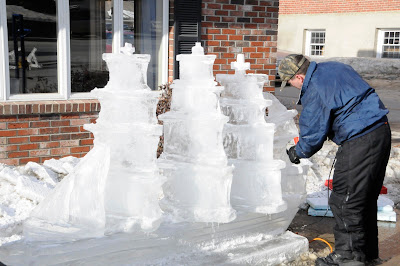 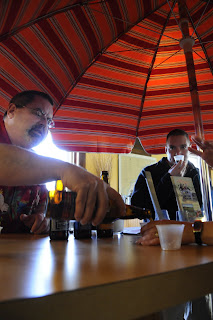 I have always been a fan of the Bar Harbor Real Ale, the brewery's flagship beer that got them off the ground in 1991, but it was the Scottish Ale and the S.O.B. that really grabbed my attention. The Scottish Ale uses smoked barley from Scotland, which gives the big (7% alcohol) nutty and dark beer an almost Scotch-whiskey character. The low-growing perennial shrub, heather, is also added to the beer right before it's finished. Brewer James stirs in the flower, which is contained in something like an over-sized tea bag, with a giant stick during the last step of production to make sure nothing hinders the flavor of the flower.

Then there's the S.O.B., which stands for Special Old Bitter, and features the picture of a rather bitter gentleman known around The Island on its label. As the story goes, if you're as bitter as that old man, then you'll like this beer. It has such an extensive amount of hops that it has a distinct grapefruit character. You really get it at the end, when a pithy tartness lingers long after the beer is gone. As the man behind the bar said in his best Maine accent, "Guarantee it'll be the last beer you'll drink mum."

I was duly impressed with the breweries less-known beers and if you ever get the chance to pick one up, I highly recommend it.
Email Post
Mattie John Bamman
After more than a decade as a travel writer and restaurant critic, I moved to Maine with my wife to start a homestead. I created Ravenous Farmer to inspire others to live more sustainable and fulfilling lives.